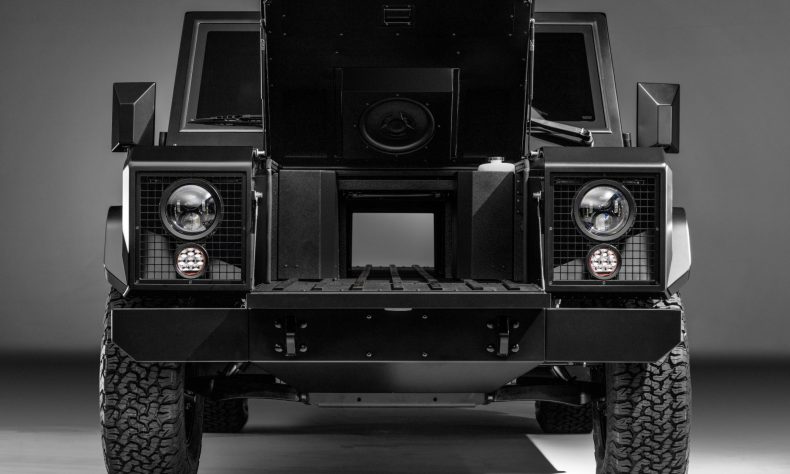 FERNDALE—Bollinger Motors announced it had been granted United States Patent No. US20190351950A1 on two uniquely named features of its electric truck—called “Passthrough” and “Frunkgate.”

Both features harness the opportunity, presented by the absence of a traditional powertrain, to reconfigure the vehicle.

“The Passthrough and Frunkgate have been among our trucks’ most defining features, and were an integral part of our DNA since day one,” Bollinger Motors CEO Robert Bollinger said. “Our new patent is proof that Bollinger Motors is reinventing trucks from the ground up.”

The patent is comprised of:

Passthrough:
The Passthrough refers to the opening that spans the length of the vehicle, from the front-cargo space (frunk, or front trunk), through the interior of the cab, to the rear of the vehicle.

In the Bollinger B1 sport utility truck and the B2 pickup, the Passthrough enables an uninterrupted 13-foot and 16-foot path, respectively, with the Frunkgate and tailgate closed. With the tailgate down, even longer objects can be transported.

Frunkgate:
The Frunkgate refers to the fold-down portion on the nose of the truck, similar to a tailgate. The Frunkgate allows cargo to be inserted through the front of both the Bollinger B1 and B2. Lifting the hood allows even more access to the frunk. An additional, lockable door in the passenger cabin allows access from the front seats. The total storage space in the frunk on both trucks is 8.6 cubic feet, and it contains four electrical outlets, making it the perfect spot to store and connect power tools.

Opening the Frunkgate, the Passthrough, and the tailgate allows a direct view through the entire vehicle. This Bollinger Motors design breakthrough allows seamless transport of tall ladders, long boards, lumber, oars, and more.

The patent is one component of the Bollinger Motors intellectual-property portfolio. Bollinger Motors has also filed patent protection for its all-electric, all-wheel drive Class 3 vehicles. The provisional patent application was filed Nov. 18, 2019.

Production for the Bollinger Motors B1 sport utility truck and B2 pickup is slated to begin in 2021, alongside the E-Chassis and B2 Chassis Cab, the world’s first and only Class 3 all-electric chassis-cab truck platform.

Founded in 2015, Bollinger Motors intends to manufacture the world’s first all-electric, on- and off-road trucks, the B1 Sport Utility Truck (SUT) and the B2 Pickup Truck. Its first prototype, the two-door B1, unveiled in 2017, is displayed at The Peterson Museum in Los Angeles, as part of the ‘Alternating Currents’ exhibit.