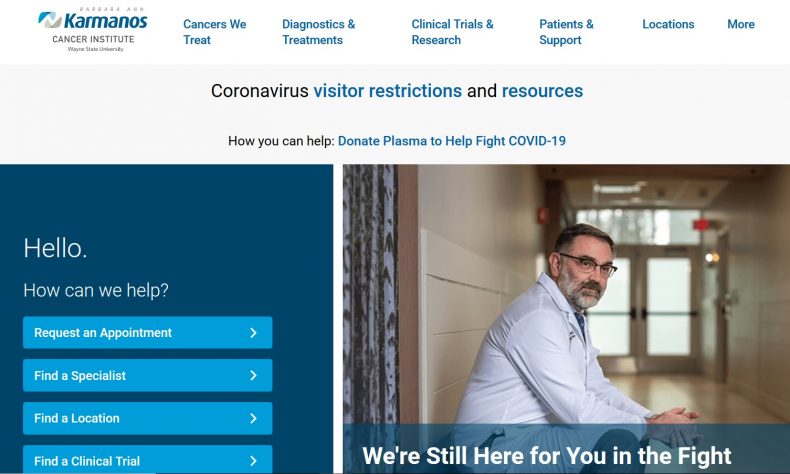 DETROIT—An oral therapy that has been studied in laboratory experiments and clinical trials at the Barbara Ann Karmanos Cancer Institute, in partnership with Karyopharm Therapeutics Inc., will soon enter clinical trials for the treatment of COVID-19 and related viruses.

The oral drug, selinexor (marketed as Xpovio), is currently approved at higher doses by the Food and Drug Administration as a treatment for cancer patients with relapsed or refractory multiple myeloma. Asfar Azmi,  assistant professor and co-leader of the tumor biology and microenvironment research program at the Karmanos Cancer Institute and Wayne State University School of Medicine and director of pancreatic cancer research initiatives, led the Karmanos team that helped the drug.

Clinical trials exploring the use of selinexor in treating COVID-19 will soon be under way at 40 locations internationally, including Karmanos Cancer Institute. The study is expected to launch within five weeks or less. Eligible participants must meet set criteria, which include a confirmed laboratory diagnosis of SARS-CoV2, hospitalization with symptoms of severe infection, and consent to participate within the first 48 hours of hospitalization.

“The fascinating thing about this trial is that we are able to apply information learned about the drug’s effect on tumor cell biology to the treatment of deadly viral infections using lower doses of the drug than we typically use to treat cancer,” said Jeffrey Zonder, M.D., who will be the Principle Investigator for the upcoming trial at Karmanos. Zonder was also the PI for several previous trials studying the drug in multiple myeloma and a co-investigator on laboratory work and a clinical trial using the drug to treat Non-Hodgkin’s Lymphoma.

Selinexor and related compounds can disrupt the movement of viral accessory proteins, thereby blocking the replication of multiple viruses in vitro and in vivo. These drugs have also been shown to mediate anti-inflammatory and anti-viral effects, including suppression of respiratory infections in several animal models. Earlier studies showed that nuclear export inhibitors, such as selinexor, could retain SARS and MERS virus accessory proteins in the nucleus of host cells, thereby suppressing their virulence and pathogenicity. These findings have ushered the planned initiation of a global randomized clinical trial for low dose oral selinexor in hospitalized patients with severe COVID-19.

“Proteins move between different compartments of the cell and their exact location is critical to their proper function,” Azmi said. “Most of the genome surveillance and tumor suppressor proteins are exported out of the cell nucleus using an exporter called exportin 1 (XPO1). Every protein carries a barcode called nuclear export signal (NES) that is recognized by XPO1 causing the export of the cargo. XPO1 is hyperactivated in several pathologies including cancer and inflammation. This excessive XPO1 activity causes unusually high export and incorrect localization of tumor suppressors and genome surveillance proteins leading to their inactivation and tumor growth. Viruses that cause influenzas, H1N1 and SARs-COV2 similarly hijack the nuclear transport machinery. This makes XPO1 a vital component of viral replication and a valid therapeutic target.”

More about the Barbara Ann Karmanos Cancer Institute at www.karmanos.org.