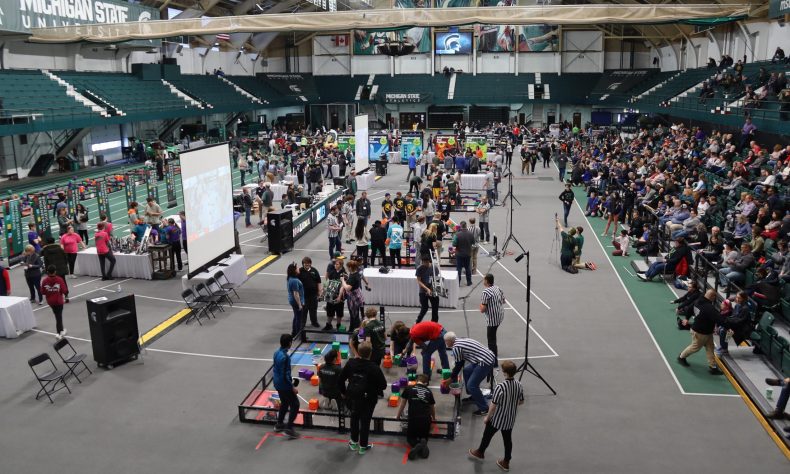 Cataclyst (Team 288A) of Grandville High School and Q (Team 8031E) of Hudsonville High School are headed to the national VEX Robotics finals after being named Michigan’s tournament champions during ceremonies in Jenison Field House.

Eighty high school teams from Michigan’s lower peninsula competed at this year’s state tourney,  each working for the right to represent Michigan in the 2020 VEX Robotics World Games in Louisville, Ky., April 22-25. Championship contests for middle school teams are at Monroe Community College.

Drew Kim, assistant to the dean for recruitment, scholarship and K-12 outreach in the MSU College of Engineering, said a lot of energy and skill goes into each VEX Robotics team.

“Teams that win at the local tournaments then qualify for the Michigan VEX Robotics State Championships and the right to join about 1,500 teams at world games,” Watson said.

This year’s participants have built innovative robots to compete on a 12-foot by 12-foot playing field. This year’s game, VEX Tower Takeover, uses 66 colorful cubes on a Tower Takeover Field. Twenty-two cubes are green, 22 are orange, and 22 are purple. Towers are placed around the playing field, where players get points by piling the cubes onto the towers or placing them in a goal. Two alliances, made up of two teams each, compete in qualifying matches during timed matches.