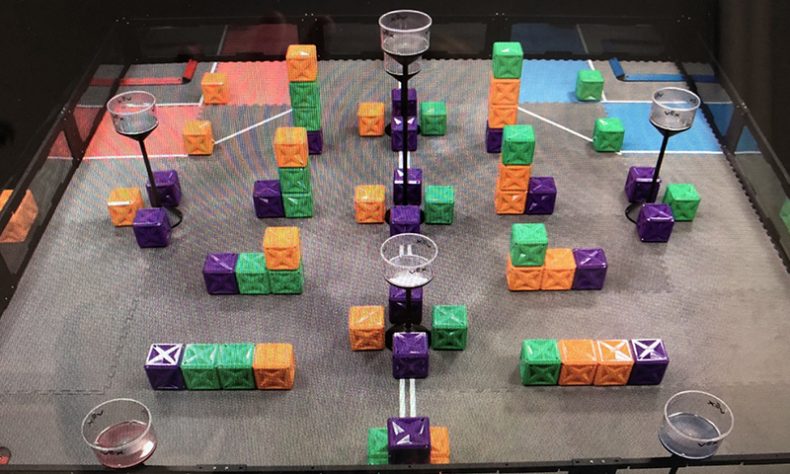 Approximately 500 of the state’s best young robotic minds will compete in two divisions during the 9 a.m. to 5 p.m. tournament. Opening ceremonies begin at 9:15 a.m. The event is free and open to the public.

Drew Kim, assistant to the dean for recruitment, scholarship and K-12 outreach in the MSU College of Engineering, said this year’s total of 80 high school teams is up from 72 last year. Teams are from all over Michigan’s Lower Peninsula. Championship games for middle school teams are at Monroe Community College.

“These VEX Robotics students are bright and creative,” Kim said. “VEX teaches them basic robot innovation, working together, troubleshooting, and having fun as teammates. MSU is so proud to nurture these young engineers and designers at one of Michigan’s biggest STEM events.”

This year’s participants have built innovative robots to compete on a 12-foot by 12-foot playing field. This year’s game, VEX Tower Takeover, uses 66 colorful cubes on a Tower Takeover Field, pictured above. Twenty-two cubes are green, 22 are orange, and 22 are purple. Towers are placed around the playing field, where players get points by piling the cubes onto the towers or placing them in a goal. Two alliances, made up of two teams each, compete in qualifying matches during timed sessions.

Much like March Madness in college basketball, elimination rounds determine the best teams in the state. Awards are presented for design, robot skills, and judges’ choice along with Amaze, Build, Create, Innovate, and Think Awards. Top honors include Tournament Championship trophies, for the top competition winners, and the Excellence Award Winner, for the best overall team in the state.

“Teams have been qualifying at local tournaments since October,” said Bob Watson, K-12 outreach and robotics coordinator for MSU Engineering. “Teams that win at the regional tournaments then qualify for the Michigan VEX Robotics State Championships.”

Sixteen high school teams will advance from Michigan’s championship to the 2020 VEX Robotics World Championship in Louisville, Ky., April 22-25. About 1,500 teams are expected to compete at the world games.

Kim said MSU is able to host the state competition because of the many volunteers who contribute time and support, including MSU student volunteers who help VEX participants learn the principles of engineering as they design and build their robots.

“Once again, we’d especially like to thank the men and women of the MSU Air Force ROTC for their years of setting up tables, chairs, and competition fields and presenting the U.S. flag during opening ceremonies — without which our large state championship wouldn’t be possible,” Kim said.

There are 255 high school VEX teams in Michigan. MSU is one of the largest university sponsors of VEX Robotics in Michigan. MSU currently supports five teams, some from schools with underrepresented student populations.

“Our efforts to continually work on the pipeline for technical workers in Michigan is some of the most important work we do,” Watson said.