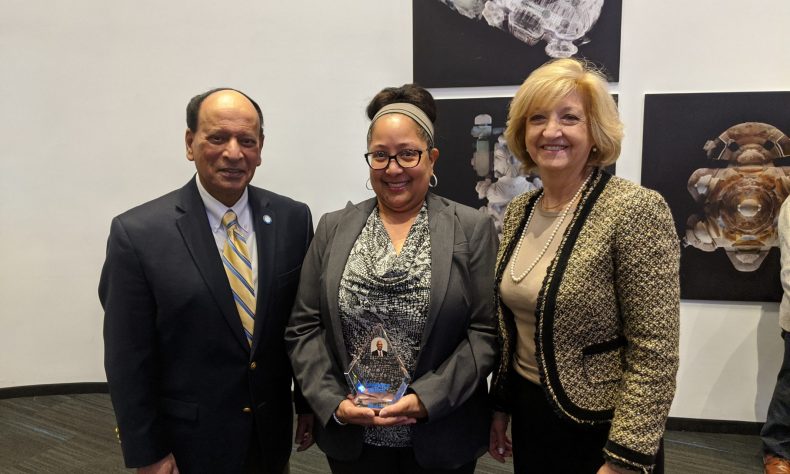 Monique Lake has taught biology, chemistry, physics, forensic science, and other science subjects over a 13-year teaching career, and is currently a chemistry and physics teacher at Harper Woods High School. She also tutors and mentors young people, and serves on the board of the Michigan Virtual Charter Academy, where she was 2018 vice president and leads its academic committee.

Lake, a Detroit native, graduated from Bishop Borgess High School in 1987, earned a Bachelor of Science in clinical laboratory science from Eastern Michigan University in 1995, and a Bachelor of Science in engineering technology management from LTU in 2000. Before starting her teaching career, she worked as an engineering sales assistant, human resources training and development coordinator, and web developer.

She joined the National Society of Black Engineers (NSBE) student chapter at LTU, and has served in many leadership positions in the Detroit alumni chapter, including vice chair of the Technical Professionals Conference Planning Committee for the 45th NSBE National Convention, which was held in Detroit in 2019. At that event, she was awarded NSBE Lifetime Membership. She is also past chair of the affiliate council of the Engineering Society of Detroit, and was named an ESD Fellow in 2015.

Lawrence Tech’s John G. Petty Award honors an individual who is positively impacting the lives of the African-American community, on campus and in the surrounding community. It was created by an LTU student committee as part of the university’s Black History Month observations.

The award is named after John G. Petty, a prominent engineer who earned his mechanical engineering degree from Lawrence Tech in 1965. Petty spent most of his career at defense contractors in the Detroit area, including Williams International and General Dynamics, where he was lead engineer on the innovative turbine engine that powers the U.S. Army’s main battle tank. He was also ESD’s first African-American president, and served on both the ESD and LTU boards of trustees for many years.

Petty passed away Jan. 23. LTU president Virinder Moudgil recalled the words Petty, a 1965 LTU alumnus, said at last year’s initial ceremony for the award named after him: “’There is a lot to be said for LTU. We beat a lot of bigger universities that people think are great,’” Virinder quoted Petty as saying. “That was the gusto he had. He never accepted that Lawrence Tech was second to anything.”

Moudgil also noted Petty’s advice to current students – read, widely and often, and never give up their vision. “’Where there is vision, there is hope,’” Moudgil said. “I am so pleased that through this award, Mr. Petty lives on at this university, as a champion and as a dear friend.”

Lake said after receiving the award: “I’m very honored and thankful, and I hope I can live up to Mr. Petty’s vision and inspiration. I knew Mr. Petty personally through working on various events at ESD, and he was always an inspiration to me.”

In the photo above, Lake is between Moudgil and LTU Provost Maria Vaz.

Last year’s initial recipient of the award was Tiffany D. Brown, a Detroit architect who earned three degrees from LTU. She is a construction contract manager at SmithGroup in Detroit and has founded and worked with several organizations to give under-represented groups the opportunity to learn more about the design professions.