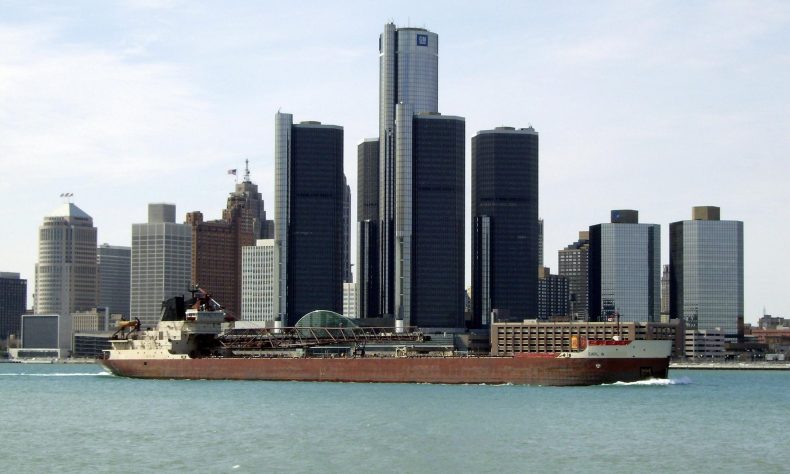 DETROIT—Residents and representatives of several environmental groups unveiled what they’re calling the Detroit River Protection Ordinance Tuesday at a rally and press conference at the Spirit of Detroit statue downtown.

Detroit City Council member Raquel Castaneda Lopez was to formally introduce the ordinance for consideration at a council meeting later in the day.

Backers say the ordinance is aimed at protecting drinking water and the Great Lakes in general, as well as bringing greater oversight and accountability to companies operating along the river.

A collapse of land contaminated by heavy metals and other pollutants into the Detroit River late last year sparked the proposed ordinance. The former Revere Copper and Brass site, just east of the historical Fort Wayne in southwest Detroit and near the site of the Gordie Howe International Bridge, is now operated by the son of the owner of Windsor, Ontario-based aggregate company Southwestern Sales, according to the Windsor Star.

“What became clear to me in writing this legislation is that we have glaring gaps in city law,” said Nick Leonard, executive director of the Detroit-based Great Lakes Environmental Law Center. “We have one of the most industrial riverfronts in the country and there was not a section dedicated to protecting our water from these sorts of incidents. This ordinance will provide a strong foundation for making sure our waters are protected.”

Added Justin Onwenu, environmental justice organizer for the environmental group Sierra Club:  “Detroiters deserve immediate action that will protect our Great Lakes and drinking water. This ordinance does exactly that. We’ve done the research, we’ve engaged with stakeholders across the city, and we’ve built consensus. This language is strong, well-written, and ready to go. So we’ll be working to urge City of Detroit officials to make sure it is passed swiftly and unanimously.”

“I am excited to sponsor this legislation and am inspired by the passionate response to the dock collapse from community members who have recognized the need to act swiftly and decisively,” Councilmember Lopez said. “It’s clear we have gaps in our laws and are currently failing to adequately protect our riverfront and drinking water. I’m committed to working with my colleagues to get this high-priority legislation passed.”

The ordinance would increase oversight and accountability for businesses along the river. This includes provisions requiring a “waterfront operation certificate” and “baseline environmental assessment” aimed at reducing the frequency of unpermitted operations and better informing the public. Additionally, the legislation would require the city to conduct annual seawall inspections.

The ordinance would also address gaps in the city’s emergency management protocols, requiring rapid drinking water testing and alternative water distribution if water is contaminated because of an incident.

The ordinance would also strengthen the Bulk Storage Ordinance, an ordinance also prompted by the behavior of Detroit Bulk Storage and their storage of petroleum coke on the riverfront.

“We need to increase setback requirements to a safe distance based on the stability of each dock so as to reduce the likelihood of a collapse,” said Gregg Ward, president of the Detroit Windsor Truck Ferry, a ferry service that has transported cars and trucks across the Detroit River for more than a century. “I operate a business along the river and I really do believe that any responsible business owner will get behind these efforts to protect our riverfront.”

(Photo above by Mikerussell at the English language Wikipedia.)