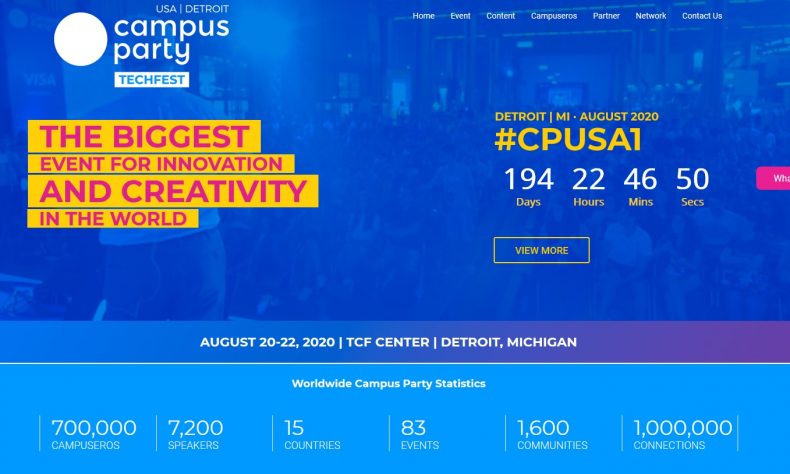 DETROIT—Detroit will serve as the host of Campus Party TechFest, Aug. 20-22 at TCF Center in Detroit, officials of the Detroit Metro Convention & Visitors Bureau announced.

Campus Party is a renowned festival of  “geeks” occurring annually in South America and Europe, drawing more than 20,000 attendees to experience cutting edge technology and be inspired by the next generation of coders, engineers, and dreamers. Although held 50 times around the globe in a dozen countries, this marks the first year Campus Party will be held in North America.

Participants will hear top technology speakers from around the globe sharing innovation and insight as a hack-a-thon works away at emerging ideas and robots and drones buzz around the arena. Campus Party Detroit has already attracted several outstanding keynote voices including “The Peoples Shark,” Shark Tank’s Daymond John, “The Physics Gal” Dianna Cowern, and “The Godfather of Street Skateboarding,” Rodney Mullen.

Campus Party TechFest is unique in that it is a 24-hour experience each day for the attendees. They camp out in tents in the convention center, encouraging them to continue their education and networking over the course of three days. Attendees participate in activities taking place 24 hours a day.

Detroit is a perfect location for Campus Party because it is setting itself up to be the next major player on the global tech scene, according to Jim Forlenza, senior vice president of MCI USA and Campus Party TechFest event organizer, “Automotive companies are defining themselves as technology companies, making the future opportunities in tech fields in this region bright,” Forlenza said.

Some of the activities that take place at Campus Party TechFest include workshops, demos, hackathons, collaboration challenges, immersive experiences, gaming and more. A portion of the event is open to the public to allow further consumer engagement as well as the opportunity to invite the even younger, next generation of geeks to embrace the latest tools and technologies.

Professional esports organization Team Renegades will be participating in Campus Party TechFest, focusing on the integration of e-sports and technology. They will play, teach, stream and lead attendees in the e-sports and streaming interactive areas of the event.

More about the DMCVB at http://www.visitdetroit.com.