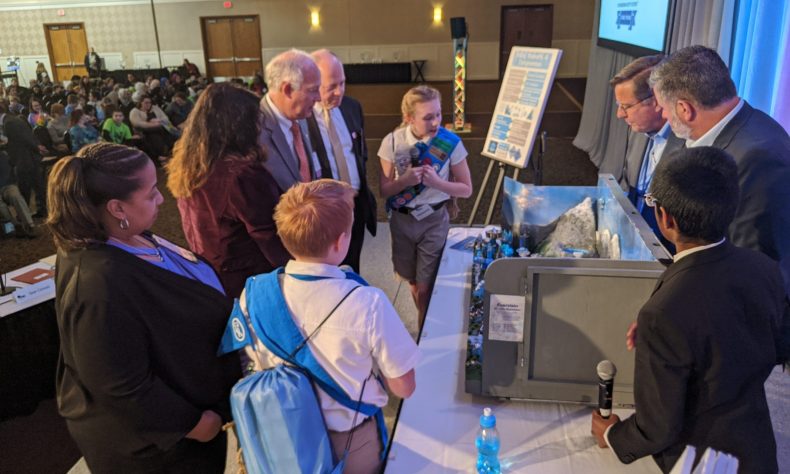 In the competition, hosted by The Engineering Society of Detroit, teams of sixth, seventh, and eighth graders design a city set at least 100 years in the future. The cities must be organized around a central principle that changes every year to keep the competition fresh.

In the 2019-20 competition, the theme was “Clean Water: Tap Into Tomorrow.” Teams were asked to design their city around an advanced water management system that would stand up to engineering challenges like climate change and natural disasters.

By winning the Michigan Regional, the St. John Lutheran team earns the right to compete in the national Future City competition, being held in Washington, D.C. Feb. 14-19 as part of National Engineers Week. The winner of the national competition receives an all-expenses-paid trip to Space Camp at the U.S. Space & Rocket Center in Huntsville, Ala.

Future City is a cross-curricular educational program where middle school students imagine, design, and build cities of the future. Over four months, students work as a team with an educator and volunteer engineer mentor to design a virtual city using SimCity software; research and write an essay addressing this year’s theme; build a model of their city using recycled materials on a budget of no more than $100; complete a project plan; and present their city before a panel of judges at regional competitions across the country in January. Regional winners go on to represent their region at the national competition.

More about Future City, including how teams can compete in 2021, at www.futurecity.org.

Presenting sponsors of Future City are the DTE Energy Foundation and the Ford Motor Co. Fund.

* Building a World of Difference, sponsored by Black and Veach: Trinity Lutheran School

* Most Youthful and Architecturally Pleasing City, sponsored by the Michigan Architectural Foundation and the Optimist Club of Downtown Detroit: Light of the World Academy, Team 1, Pinckney

* Rookie Team of the Year, sponsored by The Engineering Society of Detroit: Light of the World Academy, Team 1