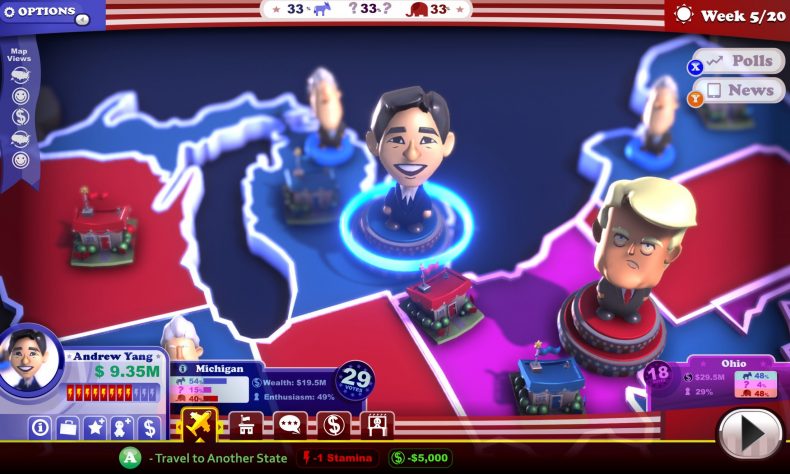 PLYMOUTH—Stardock, the Plymouth-based developer of PC strategy games, announced the latest edition of its political strategy simulation, The Political Machine 2020.

The PC strategy game allows players to choose a candidate and run for President against either a computer opponent or a candidate controlled by another person over the Internet.

“This game takes politics and brings them to players in a way that is fun and interesting,” said Stardock CEO Brad Wardell. “We use current data to model the US and voters. The game emulates some of the unexpected things a candidate might have to deal with—natural disasters, national tragedies, economic crises—and immerses the player in it.”

The game now features unique ideology trees for the candidates that allows each of them to play differently from one another.

“During the game, candidates will visit Town Halls and gain ideology points,” Wardell said. “These points will let them own certain issues. For instance, Bernie Sanders has ‘Medicare for All’, while Donald Trump can own the ‘Build the Wall’ issue.”

Each issue is modeled on a per state basis with voter support based on polling data to allow for accurate simulations of how those issues will play out in different states.

“Since the object of the game is to win 270 electoral votes, players have to pay attention to what issues voters care about in swing states,” said Wardell. “The game relies heavily on simulating voter enthusiasm, minority turnout, and what political issues are most important in a given state.”

The 2020 edition is a complete rewrite of the 2016 version of the game, with improved graphics and a more sophisticated simulation that combines polling data, voter enthusiasm, and recent United States Census results. Stardock says the game is both fun to play for casual players, and realistic enough for political wonks.

The Political Machine 2020 is coming soon. Visit www.politicalmachine.com and wishlist it on Steam.

Founded in 1991, Stardock’s PC games and desktop software include Sins of a Solar Empire, the Galactic Civilizations series, and more.