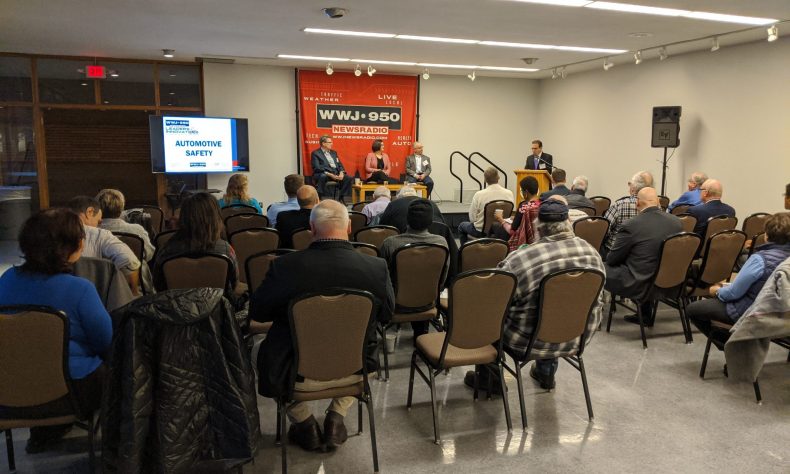 SOUTHFIELD–American automakers are wrestling with issues of safety systems and distracted driving, while American drivers are in love with their phones and still skeptical about self-driving cars.

That was the word Thursday from a panel of experts on automotive safety, at a WWJ Newsradio 950 “Leaders and Innovators” business breakfast held in partnership with Lawrence Technological University in Southfield. WWJ Business Editor Murray Feldman moderated.

Kristin Kolodge, executive director of driver interaction and human-machine interface at the auto market analysis firm J.D. Power, said the industry has “hit a fork in the road” when it comes to technology. Consumers have been disappointed by tech hype and scrutinize new technology skeptically. “There’s quite a disparity between what they’ve been promised and what they’ve been receiving,” she said.

Richard Matsu, senior director of engineering at the auto supplier Autoliv, said his firm’s studies show that “the penetration rate of full autonomy might not be that high in the near future… we’re pretty sure this thing called the steering wheel will be around for some time in some form.”

Matsu said the industry faces a crucial balance between safety, profitability, and good user experience. “There’s huge diversity in how people access technology, and a huge opportunity to improve things with improved product design,” he said. “I don’t think people want to look through hundreds of pages of an owner’s manual or spend time on YouTube. They want to get in their car and drive. They want it to come easily to them, feel natural.”

WWJ AutoBeat editor Jeff Gilbert said General Motors, Ford, and even Google’s Waymo unit have slowed down their predictions for self-driving cars based on how difficult a task driving is, and the reality that “one bad crash, and you’re going to be delayed for years.” Panelists agreed that slowing down on autonomy is not a bad thing for responsible businesses to do. At any rate, Kolodge said, the attitude of consumers toward self-driving cars is “I don’t quite believe it—you have to show me.” There are also worries about hacking and privacy. Affordability is another roadblock to autonomy, Gilbert said: “That’s why the car companies can’t say when these cars might be available, because they’d be so expensive. That’s why it’s going to start in fleets, with heavy maintenance budgets.”

Gilbert said he’s also skeptical of claims that autonomy will offer mobility to seniors and the disabled, because “automated vehicles aren’t going to be perfect. They’re going to break down.” And imagine a blind or disabled person breaking down in traffic.

Kolodge also said J.D. Power is “starting to see some negative behavior” in drivers of cars equipped with advanced driver-assist systems (ADAS) like automatic braking and lane-keeping—that they’re paying less attention to the road. That said, panelists said that semi-autonomous driving systems like Cadillac’s Super Cruise are getting better and better.

Kolodge noted that in a test with the University of Michigan’s Mcity autonomy proving ground, people were impressed with a self-driving campus bus. But she said that bus traveled at only 12 mph and followed a very conservative route with no left turns. And Gilbert noted that removing the driver from a bus also removes “the person the person who monitors and assists the passengers and communicates with the passengers.” The next step for those vehicles, Gilbert said, is a “virtual Ralph Kramden”—a reference to the loud-mouthed bus driver that Jackie Gleason portrayed in the 1950s TV series “The Honeymooners.”

In any event, panelists said, technological advances are notoriously difficult to predict.

Gilbert noted that if you’d have asked him at age 14—when Americans landed on the moon, in 1969—where technology would be today, he’d have replied that we’d have moon bases and Mars missions, supersonic jets and self-driving cars. None of that exists today—but what we do have is still pretty amazing. Gilbert said he surely wouldn’t have predicted that we could carry the total of all human knowledge around in a phone, and that we’d be able to use that phone as everything from a travel agent to an encyclopedia to a bank.