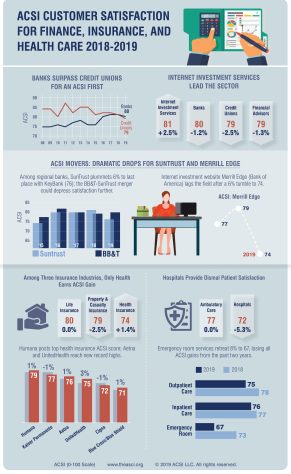 The survey also found internet investment services lead the sector, and health is the only insurance industry to gain this year.

Customer satisfaction with the Finance and Insurance sector dipped 0.6 percent to a score of 77.8 overall on the ACSI’s 0-100 scale.

Among the nine industries measured in the report, only two showed improvement: internet investment services and health insurance.

Banks fell 1.2 percent to an ACSI score of 80, while credit unions fell 2.5 percent to 79. Among banks, regional and community institutions still led the pack, despite a 1.2 percent drop to 83. National banks closed the gap, rising 1.3 percent to 78, placing them in a tie with super regional banks, which fell 1.3 percent, for the first time.

This year, all four national banks are at or within a point of their record-high scores for customer satisfaction. Citibank surged 3 percent to the lead at 81, and Chase was second at 79, inching back 1 percent from its record high posted a year ago. Bank of America is next, up 1 percent to 77, followed by Wells Fargo, which rose 3 percent to 76.

“Customers want mobile options, and big banks have the resources to deliver,” says David VanAmburg, managing director at the ACSI. “As technology improves, so does customer satisfaction. The personalized service that’s the hallmark of smaller banks and credit unions may no longer be as critical to customers, especially a younger demographic.”

TD Bank tumbled 4 percent to 77, coming in just ahead of KeyBank (down 1 percent) and SunTrust Bank (down 6 percent), which tied at 76–the bottom of the category. SunTrust Bank, which shared the lead among super regional banks last year, plummeted during the fallout of its planned merger with BB&T.

Three-way tie at the top of internet investment services

Customer satisfaction with internet investment services rose 2.5 percent to an ACSI score of 81, besting financial advisors for the first time in three years of measurement.

Edward Jones (down 1 percent) scored 80. TD Ameritrade gained 3 percent to 79, while E*Trade inched back 1 percent to 78.

Bank of America’s Merrill Edge suffered the biggest loss, plummeting 6 percent to a category low of 74. According to ACSI data, Merrill Edge struggles across the entire customer experience.

Customers soured on financial advisors, as satisfaction in the industry slid 1.3 percent to 79.

For the second year in a row, Charles Schwab remained the industry leader with an unchanged ACSI score of 82. Raymond James (down 1 percent) and UBS (unchanged) are next at 80. Fidelity, Morgan Stanley, and Wells Fargo weree steady at 79, while LPL Financial was stable at 78.

Bank of America’s Merrill fell 3 percent to 77, tying for last with TD Ameritrade, which debuted in the category.

State Farm stays ahead in property and casualty

Customer satisfaction with property and casualty insurance declined 2.5 percent to 79.

State Farm, the largest U.S. auto insurer, took the lead by holding steady at 81. Farmers was next, stable at 80, and GEICO (down 1 percent) matched the average at 79.

Three insurers came in at 78: Allstate (unchanged), Progressive (unchanged), and Liberty Mutual (up 3 percent). At the bottom, American Family inched back 1 percent to 77, while AAA tumbled 6 percent to 76. ACSI data shows AAA agents are less courteous and helpful for policy purchases and renewals.

The life insurance industry held steady overall at 80. However, the field is much tighter for policyholder satisfaction, with just four points separating first and last place.

Mutual of Omaha (down 1 percent) and New York Life (down 2 percent) shared the lead at 82, while Allstate and Farmers, which scored 81, experience significant gains, up 8 and 9 percent, respectively. Farmers reached an all-time high in policyholder satisfaction as customers laud its improved range of policy discounts.

State Farm improved 4 percent to match the average at 80. The lower end of the industry includes MetLife (down 2 percent) at 79, followed closely by Lincoln Financial (unchanged) and Prudential (up 1 percent) at 78.

Health insurance was the only insurance industry to make gains in 2019, up 1.4 percent to 74. But it’s complicated.

The score is low compared to the other ACSI-measured industries, yet policyholder satisfaction hasn’t been this high for a decade.

Customer satisfaction in hospitals is among worst measured

Consumers aren’t happy with hospital care, which fell 5.3 percent to 72. This brings down satisfaction with the Health Care and Social Assistance sector overall by 2.4 percent to an ACSI score of 74.7.

Patient satisfaction with ambulatory services was stable for the fourth year in a row at 77.

The ACSI Finance, Insurance, and Health Care Report 2018-2019 is based on interviews with 30,413 customers, chosen at random and contacted via email between Oct. 8, 2018, and Sept. 20, 2019. Download the full report at https://www.theacsi.org/news-and-resources/customer-satisfaction-reports/reports-2019/acsi-finance-insurance-and-health-care-report-2018-2019. 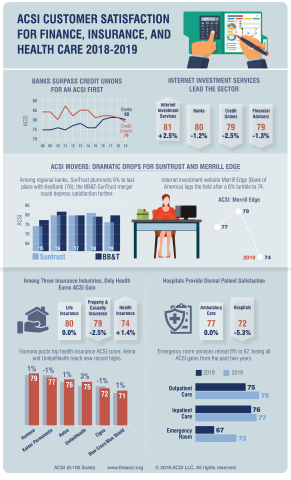