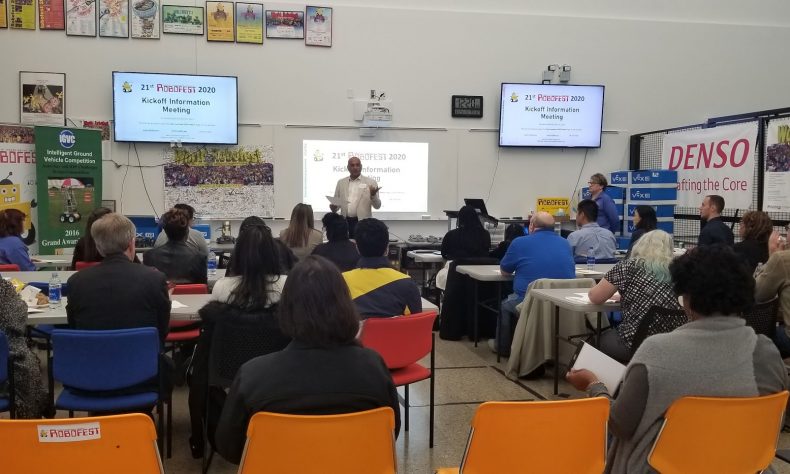 SOUTHFIELD—A South African professional golfer from the 1930s through the 1950s, Bobby Locke, coined the phrase: “Drive for show, putt for dough.”

This winter and spring, thousands of students from around the world will be programming putting robots for their chance to win trophies and scholarships in Lawrence Technological University’s World Robofest Championship. Nearly 1,000 teams and almost 3,000 students from around the world are expected to participate in the event, founded in 1999 by LTU computer science professor C.J. Chung.

Robofest officials announced the rules of this year’s 21st Annual Robofest Game Friday. The 2020 competition is called GolfBowl. In the game, students design a robot that will wield a wooden putter to put five golf balls into a slot at the end of a plastic table—including one ball that is blocked by a full 20-ounce water bottle. (There’s a tiny angle on either side of the water bottle where the slot can be reached, requiring precision in programming the putter.)

Students can also earn points for accomplishing other tasks, including knocking over partially filled water bottles at the end of the table or simply knocking golf balls off the table.

As is always true with Robofest, some parts of the competition, including the placement of the golf balls, won’t be disclosed until competition day, requiring students to program their robots on the fly just before the competition—without any adult help.

Beginning in December and continuing through the winter and spring, regional competitions are scheduled for locations in Michigan and 15 other states, as well as in more than a dozen countries overseas. Past years’ teams have hailed from Brazil, Canada, China, Colombia, Ecuador, Egypt,  Ghana, Hong Kong, Hungary, India, Lebanon, Macau, Mexico, Morocco, Nigeria, Romania, Singapore, South Africa, South Korea, Taiwan, the United Arab Emirates, and the United Kingdom.

The Robofest World Championship is set for May 14-16, 2020 on Lawrence Tech’s Southfield campus. Teams compete in the junior (grades 5-8), senior (grades 9-12_ and college divisions.

Robofest’s mission is to generate excitement and interest among young people in computer science and the science, technology, engineering, and mathematics (STEM) disciplines, develop soft skills such as teamwork, leadership, creativity, communication, and problem solving, and prepare students to excel in higher education and technological careers.

Robofest is unique among robotics competitions in that its robots must be completely autonomous—piloted only by sensors and software, not remote-controlled by gamers.

It’s also unique in that it has an “Exhibition” category, in which students are free to dream up a task that a robot can do, and then design and build a robot to accomplish that task.

Robofest is also affordable, with a team registration fee of just $50, and a basic robot kit that costs $350. Grants for robot kits are also available.

Besides the Game and Exhibition categories, Robofest also includes:

For more information on getting involved in Robofest, visit www.robofest.net.