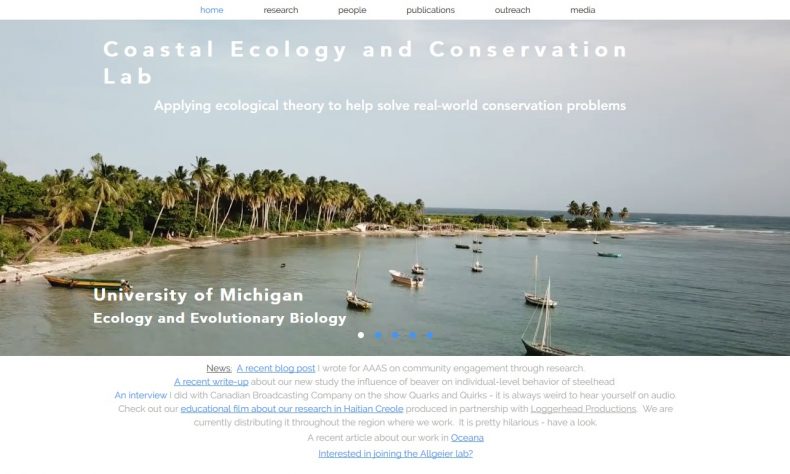 ANN ARBOR—University of Michigan marine ecologist Jacob Allgeier is among 22 early career scientists and engineers named today as 2019 recipients of the Packard Fellowships for Science and Engineering by the David and Lucile Packard Foundation.

The fellows will each receive $875,000 over five years to pursue their research.

Over the past decade, Allgeier has glued together thousands of cinder blocks to create 38 artificial reefs in a shallow bay on Abaco Island in the northern Bahamas. He will use some of the Packard Foundation funding to radio-track about 500 fish living on those reefs to learn more about their feeding behavior.

“It is a tremendous honor to have been selected for a Packard Fellowship, especially given the exceptional competition,” said Allgeier, an assistant professor who joined the UM Department of Ecology and Evolutionary Biology faculty in 2017. “This opportunity will further our ability to conduct science that I hope will ultimately benefit the conservation and sustainability of coastal ecosystems and the communities that depend on them.”

Allgeier runs a small research station on Abaco Island that includes two garages used for equipment storage. While much of the island was devastated last month by Hurricane Dorian, the two garages are still standing.

The 38 artificial reefs attract high densities of fish—snapper, grouper, damselfish, butterfly fish, grunts and other common Caribbean reef species—because the structures provide shelter from predators and food from invertebrates living in crevices between the blocks: snails, shrimp, crabs, worms and other creatures.

Fish excrement—both liquid and solid wastes—is a rich source of the nutrients phosphorus and nitrogen, which act as fertilizers to boost production of seagrass growing around the artificial reefs, Allgeier said. Enhanced seagrass growth increases invertebrate populations, providing more food for the fish, so the fish populations increase.

Data from the radio-tracking study will help refine mathematical models that predict how and where fish distribute fertilizing nutrients in tropical coastal ecosystems.

In a second phase of his study, Allgeier and his colleagues will use those findings to design a series of small-scale protected areas—built around clusters of artificial reefs—in Haiti in partnership with local fishing communities there. The nonprofit organization Food for the Poor will also partner in that effort, which is designed to help restore local fisheries.

“This project has the potential to generate a novel understanding of marine productivity that can be used to improve fisheries management in tropical coastal ecosystems,” Allgeier said.

He joins several other early career UM researchers who have been awarded Packard Fellowships in Science and Engineering. Evolutionary biologist Daniel Rabosky won in 2014 and Sarah Aciego of the Department of Earth and Environmental Sciences won in 2012, among others.

“Jake richly deserves this prestigious award,” said Diarmaid Ó Foighil, chair of the UM Department of Ecology and Evolutionary Biology. “He is an extraordinary scientist who is taking on one of the most challenging and important questions in marine ecology. We are very fortunate to have him as a colleague.”

The Packard Fellowships in Science and Engineering are among the nation’s largest nongovernmental fellowships, designed to allow maximum flexibility in how the funding is used. Since 1988, the program has supported the “blue-sky thinking” of scientists and engineers with the belief that their research over time will lead to new discoveries that improve people’s lives and enhance our understanding of the universe.

“This new class of Fellows is about to embark on a journey to pursue their curiosity down unknown paths in ways that could lead to big discoveries,” said Frances Arnold, chair of the Packard Fellowships Advisory Panel, 2018 Nobel Laureate in Chemistry and 1989 Packard Fellow. “I can’t wait to see what direction the work of these brilliant scientists and engineers will take. Their efforts will add to this beautiful web of science that connects us all to a better understanding of the world around us.”

The Fellowships program was inspired by David Packard’s commitment to strengthen university-based science and engineering programs in the United States. He recognized that the success of the Hewlett-Packard Company, which he co-founded, was derived in large measure from research and development in university laboratories. Since 1988, the Packard Foundation has awarded $429 million to support 617 scientists and engineers from 54 national universities. This year’s Fellowships are also supported in part by the Ross M. Brown Family Foundation.

More about Allgeier’s work at this link.