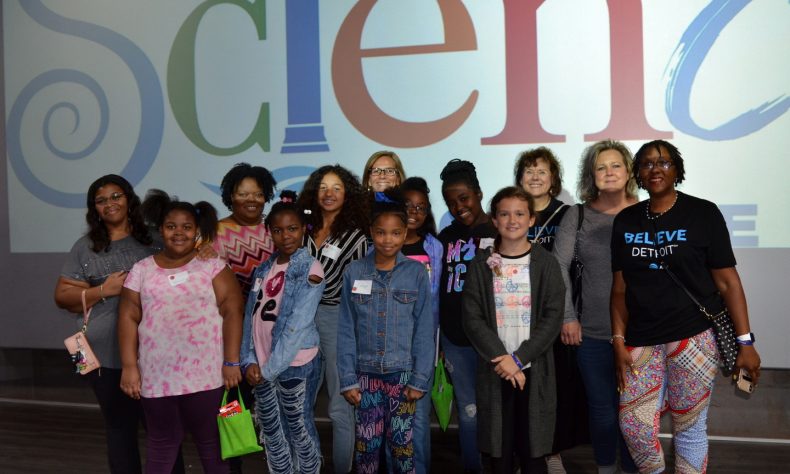 This marked the third year that Lawrence Technological University’s Marburger STEM Center teamed up with the Michigan Women of AT&T (WOA) to engage girls in the STEM fields—science, technology, engineering, and mathematics. The mission of the event, a signature program for WOA, is to inspire, educate, and encourage girls to think about how STEM can enrich their lives, as well as the lives of others.

Shawn Caggins, vice president of community outreach for the WOA and GIFT Day chair, along with  co-chair Itanya Montgomery, a Michigan-WOA member, welcomed attendees. Caggins emphasized to the participants the importance and significance of engaging in programs focused on careers in STEM. “It is imperative that we pay it forward to the next generation,” she said. “We want our young girls to be confident in their uniqueness, understanding the power within. This allows their gifts, talents and perspective to shine through. Programs such as GIFT allow the girls to hear from women in STEM related careers, who have already travelled the journey they are currently on.”

During the program, attendees had the opportunity to watch a documentary produced by LTU students, “Women Untold,” focused on the achievements of three women of color in STEM: Alice Augusta Ball, a chemist who developed the first treatment for leprosy in the early 20th century; Evelyn Boyd Granville, a mathematician who completed calculations for NASA space missions; and Jewel Plummer Cobb, a cancer researcher and, later, university president. Sibrina Collins, executive director of LTU’s Marburger STEM Center, led a question-and-answer session after the screening. The film was written, directed and produced by LTU alumna Marie Anne Torres-Lopez, who earned a Bachelor of Arts in media communications from LTU in 2019. The documentary may be viewed at https://www.youtube.com/watch?v=T5196ZW9s-g&t=735s.

Britton Foreman, senior officer with the Wayne County Sheriff’s Department, spoke with attendees about cyber security, safety, and bullying. Foreman shared his personal story about being bullied when he was much younger and why he chose a career in law enforcement. He credited his teachers for helping him through his difficult experiences. “Teachers are there to help you,” said Foreman.

Throughout the day, participants were engaged in STEM activities, including making waves and the electromagnetic spectrum, a scavenger hunt, and the WOA Rock Paint Workshop, where the girls painted their own rocks with encouraging slogans. At the end of the program, the attendees had the opportunity to engage in a “fireside chat” with women in STEM related careers. The panelists were Lesley Esters Redwine, founder and president of LER Strategic Consultants and Advisors; Cheryl Greer, program manager at General Motors; and Nadia Gilmore, training specialist at Genisys Credit Union. During the fireside chat, the panelists focused on the importance of finding mentors and support to successfully navigate a career in STEM. “The way that you learn is by making mistakes,” said Redwine. Greer added, “Learn from others’ mistakes as well.”

Cassie Byrd, chief learning officer at the Michigan Science Center, also emphasized the importance of the GIFT program and the MiSci STEMinista Project for engaging young women in STEM.

“Research shows that, despite a steady increase over the past two decades, women are still underrepresented in STEM careers—especially in engineering, physical science, mathematics, and computer science,” Byrd said. “STEMinista Project events are designed to tackle this disparity early,  by sparking interest and building confidence in STEM subjects while highlighting female role models in STEM careers. When girls are confident in their abilities, can see themselves as STEM professionals, and know that STEM is something that represents their interests—they are more likely to participate and persist in STEM. If she can see it, she can be it.”