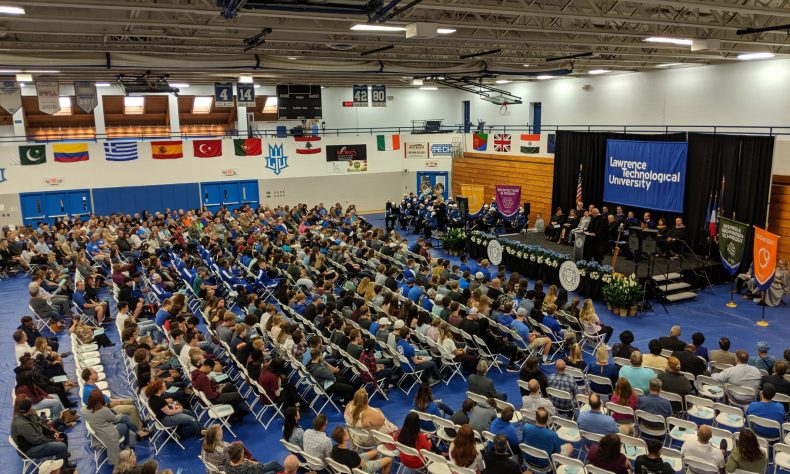 Jean Mallebay-Vacqueur, who retired from Chrysler in 2008 and who is now honorary French consul for the state of Michigan, told the students to “fight for what you think is right. It is always better to fight and get engaged rather than stay on the sidelines and say, ‘it is not my problem.’”

At the same time, he advised them to “make sure to do what I did—befriend the finance people, befriend the legal people.”

He added: “Keep learning every day. Push yourself. You are LTU. And this is the right place to find yourself.”

Mallebay-Vacqueur was the sixth recipient of LTU’s Global Citizen Award, established by LTU President Virinder Moudgil in 2014 to recognize individuals who have shown great character and leadership in addressing global issues and promoting international and social understanding.

Saturday also marked the conclusion of the annual President’s Global Village Project. This year the project saw nearly 100 LTU students learning about different cultures through Detroit tours, visits to religious institutions, poetry readings in native languages, and other activities over three days. Moudgil told the students and their parents that the project is critically important in an age of global business.

Moudgil also traced the history of LTU from its founding during the bleakest days of the Great Depression. The fact that the institution survives after 87 years and 40,000 graduates, he said, “just goes to show the power of a good idea.”

“I want to assure our students that we, the faculty, staff, and administrators of LTU, believe in you and in the effort that you will put forth to achieve your goals,” Moudgil told the incoming students. “The Brookings Institution and other independent measures tell us that your new university is among the most successful in all of America in providing you with the attributes that will prepare you for challenging, rewarding, high-paying occupations.”

Also presenting was Bram Ligon, acting LTU Student Government president, who likened the LTU experience to a line from the 1993 movie Jurassic Park: “Life finds a way. You all will endure and emerge stronger than ever, to become something greater than you ever imagined.”

LTU’s Convocation was followed by a tailgate luncheon for students and parents, and then by the home opener of LTU’s 2019 football season, the university’s first as a full member of the Mid-States Football Association of the National Association of Intercollegiate Athletics.