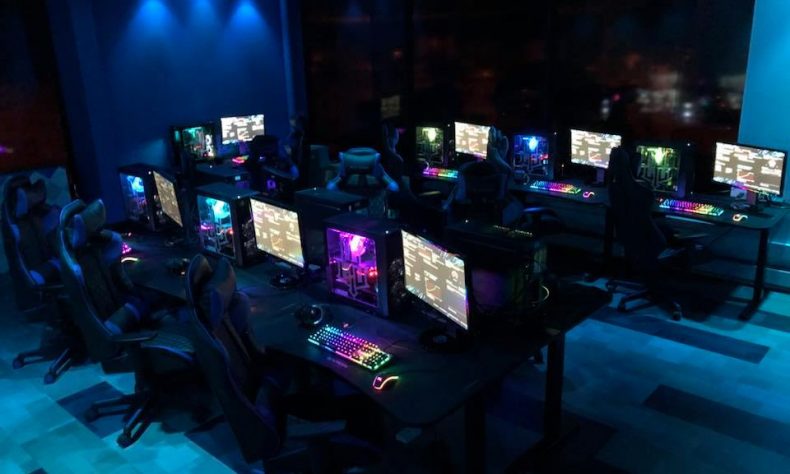 The new LTU eSports arena features 12 custom-built gaming computers with 4K monitors, a coach’s station, and a 4K big-screen TV for spectators to watch—and for players to go over game film after a competition. The equipment also includes special video gaming chairs and high-end headsets.

ESports is a form of competitive video gaming with multiple players battling against each other, usually in teams, in tournaments that are streamed live to fans or held in sports arenas. Most commonly used games for eSports are multiplayer battle games such as “Overwatch” and “League of Legends,” although sports games are sometimes used as well.

According to a February report from the gaming industry analytics firm Newzoo, eSports revenue surpassed $1 billion in 2018, up 27 percent from a year earlier, with a worldwide audience of participants and fans topping 400 million. In Michigan, many high schools and colleges are organizing teams. At LTU, more than 100 students participate in eSports through several club teams, and they’ll make regular use of the new arena.

LTU also hosts an annual eSports tournament for high school teams. Earlier this year, 48 teams battled it out in “League of Legends” online for 16 finalist spots. The 16 finalists were invited to a Saturday showdown at LTU, where they played until there were just two teams left, and that final match was taped by Yellow Flag and shown on Fox Sports Detroit. The winning and runner-up teams received LTU scholarship offers worth up to $64,000 over four years. Nearly a dozen students over the past three years have taken advantage of those scholarships to attend LTU, according to Lisa Kujawa, LTU’s associate provost for enrollment management and outreach.

Added LTU Dean of Students Kevin Finn: “ESports offers an opportunity for a student to represent their university, wear the school colors, and compete in high-level competitions like other student-athletes.”

And Lou Bitonti, president of Yellow Flag Productions, added: “State Champs, in partnership with LTU, identified the growth of eSports across many audience demographics three years ago. Coupled with LTU’s tradition of technology, we believed supporting this activity was a natural connection for the LTU student body. The LTU eSports high school competition is entering its fourth successful competitive season, and is the largest structured high school event in the Midwest. The new eSports center on LTU campus will be implementing regular high school training to help high schools to create competitive teams to play in various competitions. LTU provides the right curriculum for gaming, campus culture and the opportunity for students to represent the university.”

Jacob Hallett, a native of Jasper, Mich. who expects to graduate with a Bachelor of Science in Computer Science in May 2020—and who also works full-time for LTU as a help desk technician—got in on the ground floor of eSsports at LTU his freshman year. “I’ve been with it ever since, getting more and more involved, developing an organization,” he said. For the 2018-19 school year, an official LTU student organization, LTU eSports, was chartered, with faculty advisor Marshall Ashton, director of LTU’s Bachelor of Fine Arts in Game Art program.

Hallett’s favorite eSports game is called “Rocket League.” “It’s essentially a game of soccer but you drive vehicles around to hit the soccer ball, working in teams of up to four,” Hallett said.

LTU CIO Tim Chavis said the university’s policy of providing students with high-end laptops makes it easier for LTU to host eSports tournaments. Other schools might have to spend hundreds of thousands of dollars on laptops for participants, he said, “but here, we just pull them off the shelf.”