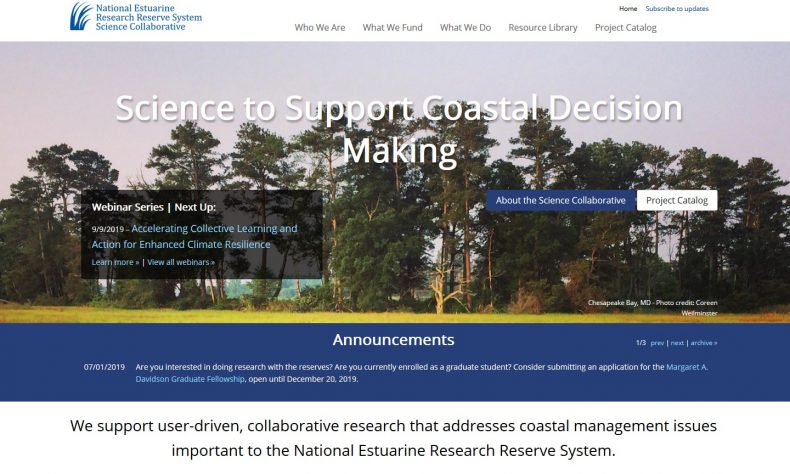 ANN ARBOR—A collaborative, multisector team, led by the University of Michigan’s Water Center at the Graham Sustainability Institute and its School for Environment and Sustainability, has been awarded a five-year, $20 million cooperative agreement to support the National Oceanic and Atmospheric Administration in overseeing research at a nationwide network of 29 coastal reserves.

Initially selected five years ago to help coordinate the National Estuarine Research Reserve System (NERRS) Science Collaborative program with NOAA, the team renewed its tenure through a recent national competition. The NERRS Centralized Data Management Office, at the University of South Carolina, provides data management support for the reserve system and is an ex officio member of the team.

In addition, “freshwater estuaries” occur where rivers flow into large lakes, such as the Great Lakes, and possess many of the same characteristics as traditional brackish estuaries. An example of a freshwater estuary in the reserve system is Old Woman Creek on Lake Erie, near Huron, Ohio.

The NERRS Science Collaborative supports research on the impacts of coastal habitat changes resulting from coastal development and climate change, the application of ecosystem services approaches to coastal protection and restoration, the impact of land use change on estuarine ecosystems, and the application of syntheses of long-term monitoring data especially from programs such as the NERRS System-wide Monitoring Program to reserve-identified management challenges.

Said Jennifer Read, director of the UM Water Center and principal investigator for the new cooperative agreement: “We are looking for opportunities to expand reserve participation in the program, building on and extending the excellence the program has attained since its inception in 2010. This will ensure the reserves are in position to help decision makers restore, protect and improve some of this country’s most vital and beloved coastal ecosystems.”

The first call for research proposals is anticipated later this fall, as early as October 2019. Projects typically address a coastal management issue for a specific reserve, and results are used to benefit the research reserves and coastal communities throughout the coastal zone.

“Our nation’s coasts and estuaries are extremely important to our nation, supporting local economies, recreation, and the quality of the food we eat from our nation’s coastal waters,” said Dwight Trueblood, NOAA’s NERRS Science Collaborative program manager. “The research reserve’s Science Collaborative programs will fund projects that engage communities and use the best available science to address some of our most pressing coastal environmental problems.”

Under the cooperative agreement, UM and NOAA will jointly manage the NERRS Science Collaborative, which awards an average of $4 million annually to support research. The process used for the competitively awarded, peer-reviewed grants brings together organizations, community leaders and scientists to determine the best ways to address the pressing needs of coastal communities. The approach prioritizes projects with research results that will be relevant and usable, while increasing the availability of helpful data and tools.

A core group of seven UM faculty researchers, staff members, and students, along with the partners identified above, will guide the NERRS Science Collaborative. Through national competitions, the program will support three kinds of projects: collaborative research projects to generate science that informs decisions (up to three years and $600,000); catalyst projects to expand science use and impact (one to two years and $75,000-$200,000); and science transfer projects that promote the use of science (up to two years and $45,000-$100,000).

“Now is the time to accelerate and double down on efforts to provide real-world solutions, guidance and tools that make science understandable and actionable,” said Maria Carmen Lemos, associate dean for research at UM’s School for Environment and Sustainability. “It’s an exciting opportunity to partner across disciplines and work hand-in-hand with communities to protect and preserve our critical ecosystems.”

Estuaries are among the most biologically productive natural habitats on Earth, with a great abundance and diversity of plant and animal life. They serve as important buffers by filtering pollutants, shielding coastal areas from storms and preventing soil erosion.

Estuaries also provide a safe haven and protective nursery for small fish, shellfish, migrating birds and coastal shore animals. In the United States, estuaries are nurseries to more than 75 percent of all fish and shellfish harvested, according to NOAA.

The National Estuarine Research Reserve System was established by the federal Coastal Zone Management Act of 1972. Each reserve is managed by a lead state agency or university with input from local partners.

More about the NERRS Science Collaborative at this link.

More about the UM Water Center at this link.

More about the UM School for Environment and Sustainability at this link.