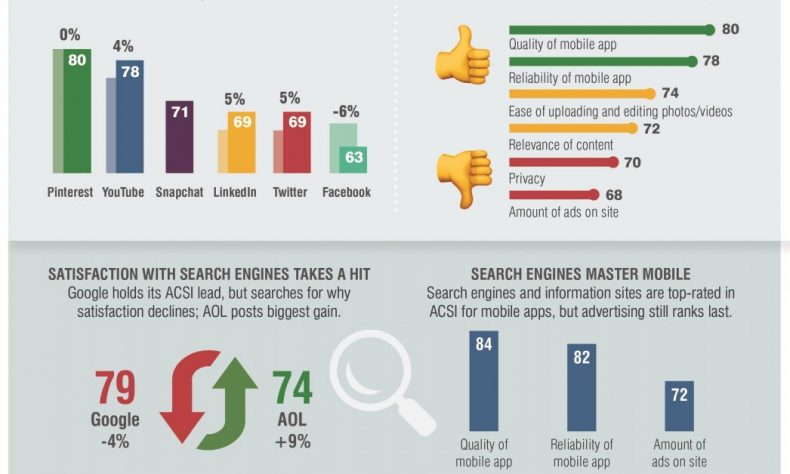 ANN ARBOR—User satisfaction with social media isn’t falling, but the industry has room for improvement.

After dropping in 2018, customer satisfaction with social media overall held steady at 72 on a scale of 0 to 100, according to the American Customer Satisfaction Index (ACSI) E-Business Report 2018-2019, which covers internet social media, search engines and information, and news and opinion.

Social media remains one of the lowest-performing categories in the index, lingering in the bottom six among 46 ACSI-measured industries. While 70 percent of adults in the U.S. use social media to connect and share information, Americans are becoming more attuned to issues surrounding data privacy and expect action from the major social media players.

“The Cambridge Analytica revelations have had lasting reverberations, with many Americans wary of the mishandling of private information,” says David VanAmburg, managing director at the ACSI. “Users are monitoring their browsers and adjusting privacy settings, while the use of ad blockers continues to grow steadily. There are some bright spots, but many social media companies will have to regain consumer trust if they want to grow satisfaction.”

Facebook has faced privacy controversies, including Russian election interference, fake news and accounts, and potential censorship of political news. This contentious atmosphere perhaps explains why customer satisfaction with Facebook nosedived 6 percent to the bottom of the industry at 63.

Privacy is at an all-time low for Facebook, and it trails other social media sites by a wide margin. Facebook also rates lowest for the amount of advertising it displays, ease of uploading photos and videos, and content relevance, as users have issues with Facebook’s news feed.

Meanwhile, Pinterest continues to deliver an exceptional customer experience, and led the industry for the second straight year with a score of 80, unchanged from a year earlier. ACSI data show the site rates best in class for content relevance and information variety. For Pinners, even ads appear to meet their needs. Pinterest ranks highest for providing a level of advertising that is most acceptable to users. It also scores the top mark for mobile app quality, which ACSI measures for the first time this year.

YouTube came in second with a 4 percent jump to 78, followed by Wikipedia at 74, a 4 percent drop, then Instagram at 72, unchanged. Snapchat debuts this year with a score of 71, with high marks for mobile quality. Both LinkedIn and Twitter climbed 5 percent to 69. Tumblr tumbled 6 percent to an all-time low of 64, just ahead of Facebook.

Google remained the dominant market leader in search despite falling 4 percent to 79. The loss occurred amidst multiple controversies with the now-defunct Google+ social network. According to ACSI data, users also believe Google’s overall site performance is worse year over year.

AOL, which was purchased by Verizon in 2015, skyrocketed 9 percent, taking it from the industry’s bottom last year to third place with an ACSI score of 74. Meanwhile, Yahoo!—also part of Verizon Media—plummeted 5 percent to last place at 70.

Ask.com (up 4 percent to 73) and Answers.com (up 3 percent to 71) both improved from the previous year. Microsoft platforms Bing and MSN tied at 72, with the former falling 1 percent and the latter dropping 5 percent.

Give it up for the smaller internet news and opinion sites

User satisfaction with online news rose 2.7 percent to a record high ACSI score of 77. In the United States, about 90 percent of adults get at least some of their news via digital outlets like mobile or desktop.

Smaller internet news and opinion sites were up 4 percent combined and led the industry at 80, generally regarded as the standard of excellence in the ACSI. This group includes numerous local news outlets.

FOXNews.com holds the lead among individually measured sites, unchanged at 78. It has the most loyal audience, with users more likely to return to the site compared to other news outlets’ audiences.

Verizon Media’s HuffPost (70) and CNN.com (69) sit at the bottom of the industry. While CNN.com rises 1 percent this year and improves across much of its user experience, it’s not enough to lift it out of the cellar.

The ACSI E-Business Report 2018-2019 on internet social media, search engines and information, and news and opinion is based on interviews with 7,690 customers, chosen at random and contacted via email between July 17, 2018, and June 26, 2019. Customers are asked to evaluate their recent experiences with the largest social media, search/information, and news websites in terms of visitor traffic, plus an aggregate category consisting of “all other”—and thus smaller—websites in those categories. Download the full E-Business Report.

The American Customer Satisfaction Index (ACSI), developed by Claes Fornell, Donald C. Cook Distinguished Professor Emeritus of Business Administration at the University of Michigan  has been a national economic indicator for 25 years. It measures and analyzes customer satisfaction with more than 400 companies in 46 industries and 10 economic sectors, including various services of federal and local government agencies. Reported on a scale of 0 to 100, ACSI scores are based on data from interviews with roughly 300,000 customers annually. For more information, visit www.theacsi.org. 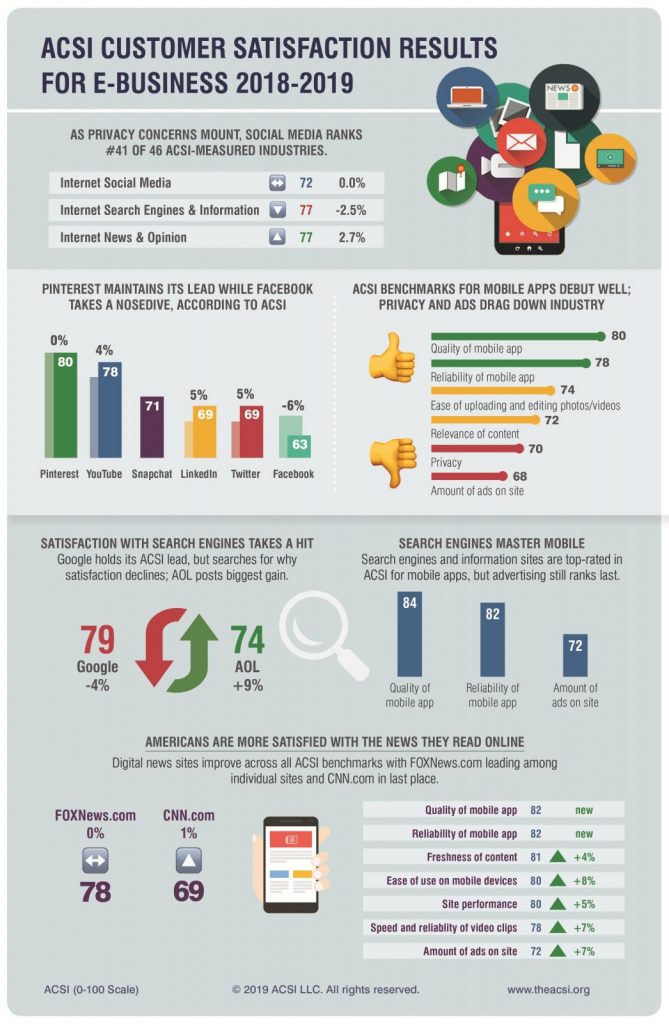