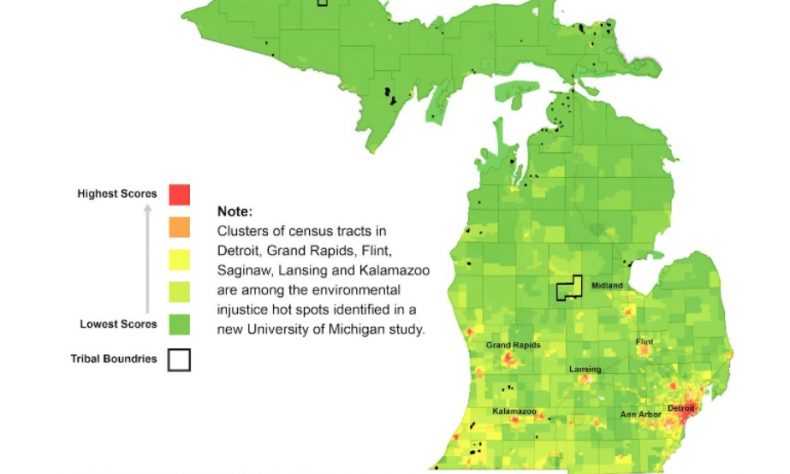 ANN ARBOR—A new study by a University of Michigan student team has identified “hot spots” of environmental injustice across the state.

U.S. Census tracts in Detroit, Grand Rapids, Flint, Saginaw, Lansing and Kalamazoo are among the hot spots identified in the study, which was released Thursday, July 25.

Those census tracts scored highest on a measure of environmental injustice, devised by three UM graduate students, comprised of 11 environmental indicators and six demographic indicators. A high EJ score means that a community has both a high risk of exposure to environmental hazards and a high vulnerability due to social factors, according to the researchers.

The locations with the highest scores are census tracts with large concentrations of minority residents, high levels of poverty and unemployment, low educational attainment, and other indicators of social disadvantage, according to Paul Mohai, a professor at the UM School for Environment and Sustainability who advised the students.

“A key finding of this report is that environmental injustice exists across Michigan, with residents of low-income and minority communities disproportionately burdened by environmental contamination and health risks—just as we saw in Flint,” said Mohai, one of the founders of the U.S. environmental justice movement.

One of those recommendations—which led directly to the student project—was to develop a screening tool to help identify the Michigan communities that are the most vulnerable and hardest hit by pollution. The information provided by the screening tool could then be used to develop solutions to alleviate disproportionate environmental burdens across the state.

The three graduate students—Laura Grier, Delia Mayor and Brett Zeuner—developed a Michigan-specific screening tool for a project they completed in partial fulfillment of master’s degree requirements at the School for Environment and Sustainability. Their “mixed methods” study included both data analysis and interviews with 30 environmental justice leaders.

The Michigan Environmental Justice Coalition was a partner on the project. The study is the first comprehensive quantitative and qualitative assessment of the status of environmental justice in Michigan.

“Results from our mixed-method analysis reveal the need for stronger state-level environmental policy—supported by a screening tool—to protect vulnerable communities from the disproportionate impacts of pollution,” said study co-author Grier. “Our analysis makes the case for future policy decisions to be informed by the perspectives of affected community members, especially the voices of minority, indigenous and low-income residents who have historically been excluded from decision-making processes.”

For the study, the students drew on data from the U.S. Environmental Protection Agency, the Department of Housing and Urban Development, and the Census Bureau.

The information gathered by the students was then used to calculate an environmental justice score for each census tract in Michigan. The scores were used to create maps that revealed hot spots of disproportionate exposure to environmental hazards, as well as high vulnerability due to demographic factors. 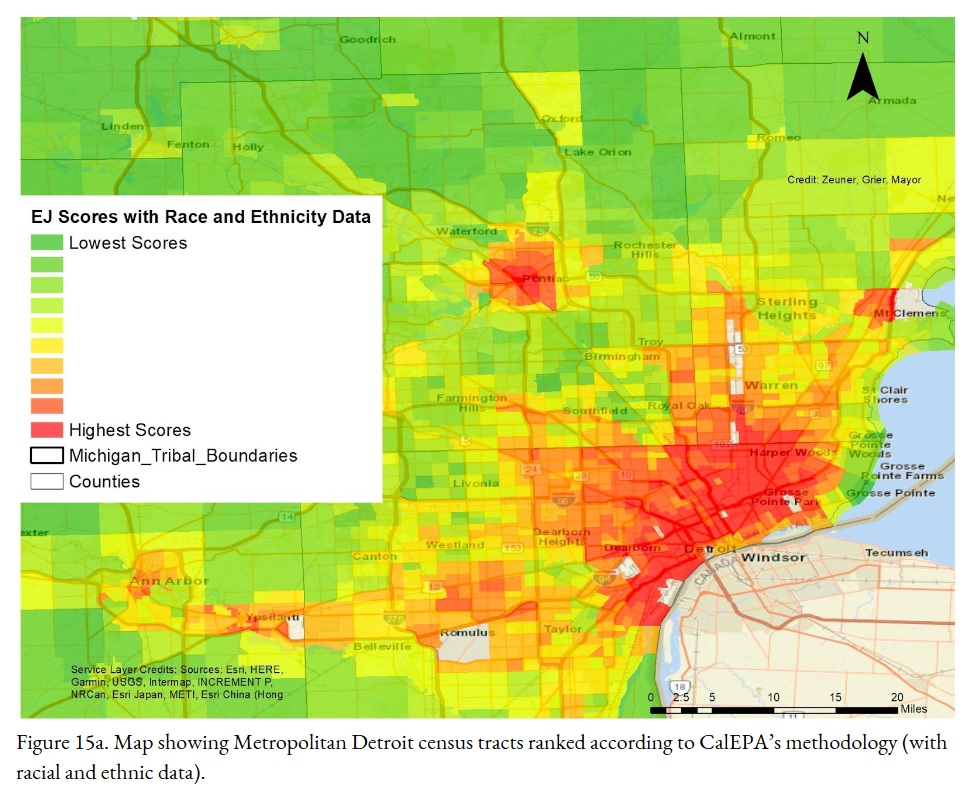 “We urge the state of Michigan to adopt this screening tool as its own, to help identify Michigan communities that are hardest hit by pollution and to adopt solutions to alleviate the disproportionate burdens that those communities bear,” said Michelle Martinez of the Michigan Environmental Justice Coalition.

For the executive summary of the report, click here.