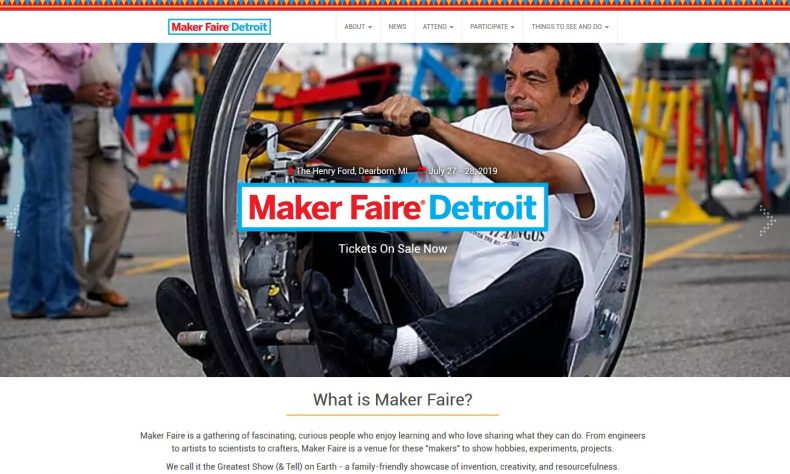 This year’s extravaganza features more art, more hands-on workshops and a new main stage filled with entertainment of all kinds, from music and circus acts to a special guest, “Star Trek: The Next Generation” and “Reading Rainbow” alumnus LeVar Burton.

In honor of the 10-year anniversary, admission for kids 11 and younger is just $10.

Burton will join Maker Faire Detroit Saturday, July 27 on the main stage at noon for a quick talk, including his inside story of the out-of-this-world making of In Saturn’s Rings alongside the film’s producers (custom screening follows in the Henry Ford Museum Giant Screen Experience), his experience as a new media pioneer, and closing with a reading from his book, “The Rhino Who Ate a Storm.” Throughout the weekend, guests can check out other special talks and musical acts, including a comedy slide show performance celebrating classic and kitschy American life and style from the Ambassador of Americana, Charles Phoenix inside Anderson Theater, and live performances from a Star Trek fan-band, Five Year Mission, on the main stage.

New makers and experiences for 2019 include massive video art from the D’Lectricity festival inside the museum, indie gaming demos, giant Skeebowling, circuit-bender OK Housecat’s toys-turned-hacked-synthesizers, a 40-foot Ferris Wheel, and a live Lego build of the museum’s famous clocktower constructed by the Michigan Lego Users Group. The Henry Ford and guest artisans will be bringing a bit of Greenfield Village artistry to the Faire with wheel-thrown pottery, a mobile glass hotshop, metal forging, and a hands-on punched tin activity for crafters. Other hands-on opportunities include fan-favorite learn to solder, presented by SME, Arts & Scraps, presented by Ford Motor Co. Fund, and new for 2019, from the local Detroit retail space and studio POST, multiple workshop opportunities including indigo dying and leather working.

Ticket prices for Maker Faire Detroit are $28 for adults 12-61, $10.00 for youth 5-11, and $26 for seniors 62+, and can be purchased now. Children four and under are free. Members of The Henry Ford receive 50 percent off adult admission to Maker Faire Detroit. A shuttle service sponsored by the University of Michigan-Dearborn will also be available at its Fairlane campus at 1900 Hubbard Drive in Dearborn. For more information, visit http://www.makerfairedetroit.com or http://www.facebook.com/makerfairedetroit.

The Henry Ford fosters inspiration and learning from hands-on encounters with artifacts that represent the most comprehensive collection anywhere, focusing on innovation, ingenuity and resourcefulness in America. Its unique venues include: the Henry Ford Museum of American Innovation; Greenfield Village; the Ford Rouge Factory Tour; the Benson Ford Research Center; and Henry Ford Academy, a public charter high school. Together with its online presence at thehenryford.org, its national television programs, “The Henry Ford’s Innovation Nation” and “Did I Mention Invention?” and other resources, The Henry Ford helps individuals of all kinds to unlock their potential and help shape a better future. The Henry Ford advanced its role as a catalyst for change in education with the acquisition of The STEMIE Coalition, a growing affiliation of organizations dedicated to fostering innovation, invention and entrepreneurship in students, K-12. With STEMIE, The Henry Ford hosts the National Invention Convention and Entrepreneurship Expo (NICEE) and makes innovation learning curriculum accessible to educators and students worldwide.