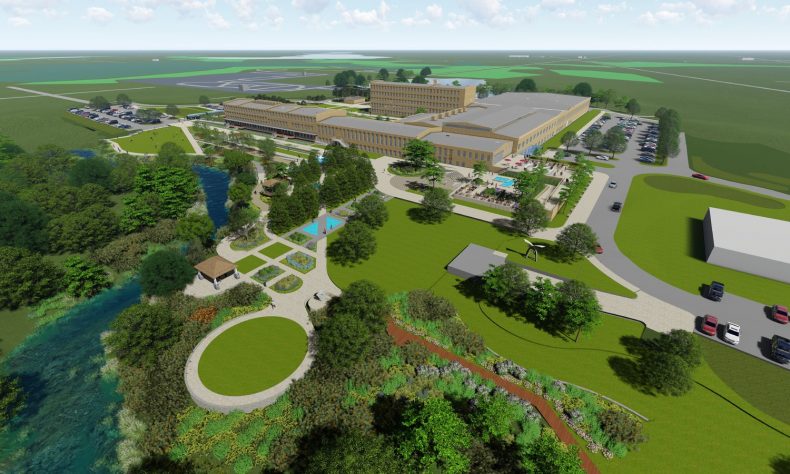 VICKSBURG—An abandoned, historic paper mill in the Kalamazoo County village of Vicksburg will be transformed into a mixed-use development in an $80 million project supported by the Michigan Strategic Fund, the Michigan Economic Development Corp. announced.

The project received support through the Transformational Brownfield Plan program, an effort designed to attract businesses and developers to invest in large redevelopment projects.

“The redevelopment of the Vicksburg paper mill into a dynamic, exciting multi-use development will bring the village of Vicksburg and the surrounding area to life, and represents exactly the type of development the Transformational Brownfield Plan program was intended for: supporting big-impact community revitalization projects around the state,” said Jeff Mason, CEO of the MEDC, which conducts due diligence and administers programs on behalf of the MSF. “With today’s support, Paper City Development’s visionary project will give new life to a historic resource that has played a major role in the identity of the community throughout its history, and will serve to bring sustainable economic vibrancy to the area for years to come.”

Paper City Development LLC received MSF approval of a Transformational Brownfield Plan for its proposed multi-site mixed use redevelopment project in the village of Vicksburg and Schoolcraft Township that will include hotel and residential space, incubator space for microbreweries, a beer garden, demonstration gardens, public green space and more. The Mill at Vicksburg project includes the redevelopment of the abandoned historic mill, a former gravel pit and surrounding undeveloped property in the village, and will be a catalyst for long-term, future growth in the entire region.

The entire project is expected to generate a total private investment of nearly $80 million and create 221 permanent, full-time equivalent jobs. MSF today approved a Transformational Brownfield Plan that authorizes several sources of tax capture in support of the project. The entire package is valued at $30 million.

“Today’s approval, and the entire process of working with our local, regional and state entities, is a wonderful example of how public and private sectors can partner to transform communities,” said Chris Moore, owner of Paper City Development. “We are excited to be Michigan’s second transformational brownfield project and look forward to showcasing the impact The Mill at Vicksburg will have on Southwest Michigan.”

The mill began operation in the early 1900’s and for the next century, served as the economic engine and cultural hub of Vicksburg. Paper products were produced at the mill and multiple owners continued operations until the mill’s closure in 2001.

Moore, a native of Vicksburg, worked at the mill summers while in college, and both his father and grandfather worked at the mill throughout their careers. After establishing his own company, Concord Technologies in Seattle, and opening Old Stove Brewing Co. in Pike Place Market in downtown Seattle, Moore set his sights on saving Vicksburg’s former paper mill from the wrecking ball in 2014.

Moore has retained a team with deep experience in historic rehabilitation, landscape architecture, sustainable business development, brownfield redevelopment and many other disciplines to help see his vision for the mill and the village of Vicksburg come to fruition.

The Transformational Brownfield Plan (TBP) program aims to revitalize communities by allowing large-scale, transformational projects to be reimbursed a portion of the income and withholding tax and property tax revenue generated by the new development and to receive an exemption from sales and use taxes for the new investment made on challenging brownfield sites. Incentives for the Vicksburg development project are based on an independent, third-party analysis conducted by the University of Michigan Research Seminar in Quantitative Economics and W.E. Upjohn Institute for Employment Research.

Projected present value of gross new tax revenues to the state will total $19.9 million. Overall, the estimated state-benefit-to-incentive ratio is $2.30 in state revenue for every $1 incentivized.

“The transformational brownfield plan represents a major milestone for The Mill at Vicksburg. We are excited to proceed with critical stabilization work at The Mill immediately,” said Paper City Development COO Jackie Koney. “We continue to be humbled and appreciative of the support we have received from so many and look forward to pursing this endeavor together.”

For more on the MEDC and its initiatives, visit www.michiganbusiness.org.