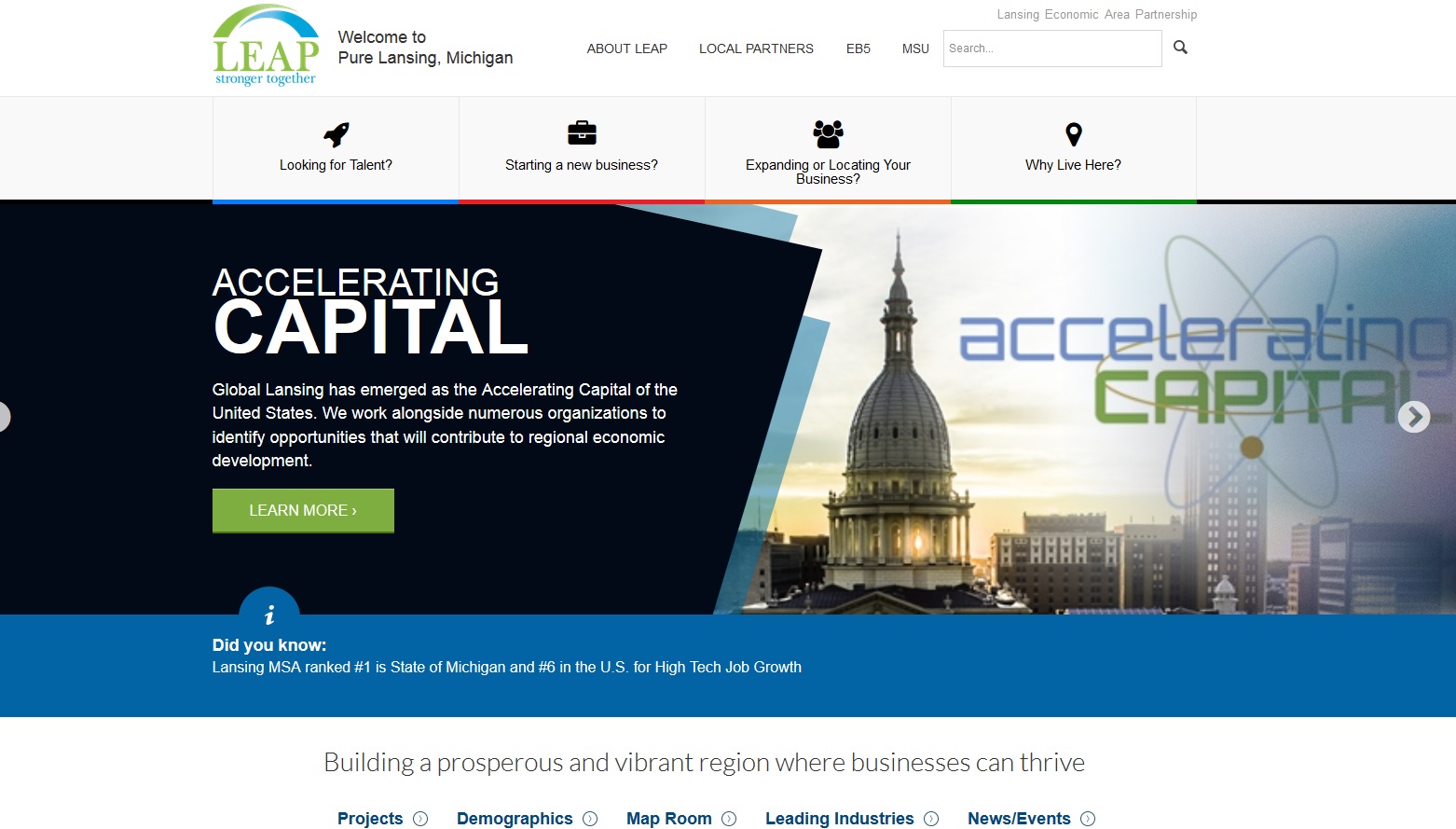 LANSING – The Lansing-East Lansing area was named the third best metro in the nation for sustainable development in Site Selection Magazine’s 2019 Sustainability Rankings, among other Midwestern powerhouses like Grand Rapids-Wyoming and Minneapolis-St. Paul, Minn.

Site Selection is the premier magazine of news on corporate facility location and area economic development. Each year, the magazine publishes a sustainability ranking list of countries, U.S. states and U.S. metros considered top locations for sustainable development. The rankings factor in what the magazine calls “standard” green metrics such as LEED-certified buildings, renewable energy use, and green building incentives, as well as unique inputs such as corporate social responsibility (CSR) profiles, brownfield redevelopment, and population happiness and well-being.

“This analysis illustrates how economic development is, at its core, environmentalism,” said Bob Trezise, president and CEO of the Lansing Economic Area Partnership (LEAP). “You can’t have a strong region economically without strong environmental stewardship. LEAP is proud to lead sustainable development efforts throughout our region, including brownfield redevelopment projects that help clean up contaminated and blighted properties and put them back on the tax rolls.”

In June, a LEAP-led coalition of community partners, including lead applicant the City of Lansing, the City of East Lansing and Clinton, Eaton and Ingham counties, received the maximum $600,000 grant from the Environmental Protection Agency to jump-start this kind of brownfield site redevelopment throughout the region. The 2019 grant followed a successful 2015 EPA Brownfield Grant for the region, which resulted in the environmental assessment of 42 properties and spurred projects across the region.

Apart from being better for the environment, sustainable development is simply better development. In most parts of the world, renewable energy sources such as solar power, wind, and hydropower are cheaper than their nonrenewable and polluting counterparts, oil and gas. Many governments are starting to include environmental impact considerations in policy and incentive programs. Brownfield redevelopment incentives have spurred development on otherwise forgotten corners, downtowns and corridors of our communities. Each site is mitigated of contamination, a building is rehabilitated, a site is brought back to life and put on the tax rolls, reducing waste and reactivating blighted, contaminated spaces.

Michigan and the Midwest were significant players in Site Selection’s rankings, challenging negative Rust Belt stereotypes and showcasing strides in innovation and environmental stewardship. In addition to Lansing-East Lansing’s third place ranking among U.S. metros, Michigan was the No. 5 ranked state in the nation overall and No. 2 in the East North Central region. The full article and list of rankings can be found on Site Selection’s website at https://siteselection.com/issues/2019/jul/sustainability-rankings-top-locations-for-sustainable-development.cfm.

The Lansing Economic Area Partnership (LEAP) is a coalition of area leaders partnering to build a stronger community for all–working every day to grow, retain and attract business. Learn more about LEAP at www.purelansing.com.