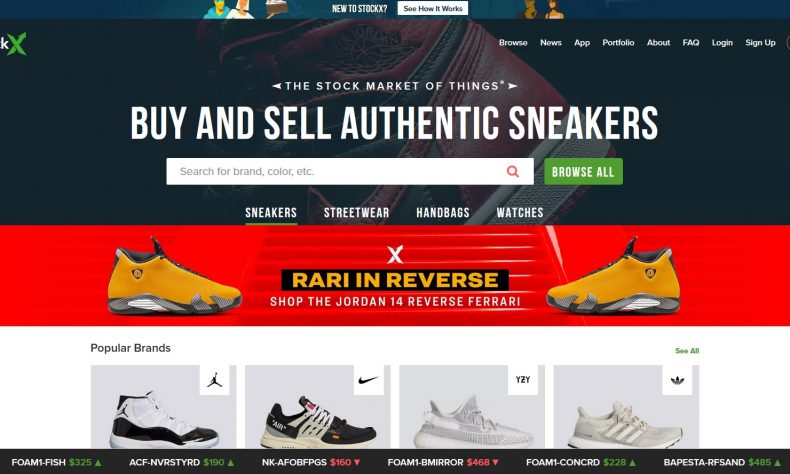 The company also announced today the appointment of Scott Cutler as CEO. Cutler succeeds co-founder Josh Luber, who will continue to serve on the executive leadership team and board of directors.

The company, which surpassed a $1 billion annual gross merchandise value run rate in less than three years, plans to use the new investment to further expand its international growth with a specific focus on Europe and the Asian markets. StockX has customers in nearly 200 countries and millions of active users.

The funding will also allow the brand to diversify its product categories and extend its offline reach with brick-and-mortar locations in key international markets. The first-of-its-kind online ‘bid/ask’ marketplace will focus heavily on product development and will continue to collaborate with some of the world’s foremost brands to release products directly on the StockX platform through its “initial product offerings.”

Cutler, who assumes his new role as CEO immediately, joins StockX from eBay Inc., where he most recently served as senior vice president, Americas. From 2015 to 2017, the longtime technology executive was president of StubHub—the world’s largest ticket marketplace—where he oversaw significant growth in the business through global expansion and strategic partnerships with professional sports leagues, teams, and artists. Prior to StubHub, Cutler was an executive vice president at the New York Stock Exchange, where he oversaw over $1 trillion in capital market financings and led some of the largest technology IPOs, including LinkedIn, Twitter, and Alibaba. Cutler will also join StockX’s board of directors along with GGV’s Hans Tung.

“Scott and I met just two days after StockX went live,” Luber said. “His extraordinary background mirrors the unique business model we have built at StockX. He understood the power of a ‘stock market of things’ and quickly became a friend and trusted advisor. Over the three years that followed, as the business scaled rapidly, Greg [Schwartz, StockX co-founder and COO] and I had the idea that Scott might one day be the perfect CEO to take us to the next level. Then the stars aligned—the growth continued, we added three world-class investors to our team, and Scott became available. We weren’t looking for a new CEO, but this was a no-brainer.”

Co-founded in February 2016 by Luber, Schwartz, and Dan Gilbert, founder and chairman of Quicken Loans, StockX has grown from a sneaker stock market to include four additional verticals—streetwear, watches, handbags, and the most recent addition, collectibles. The company does millions of dollars in transactions daily and moves thousands of products through its four authentication centers across the U.S. and Europe, which will soon be home to a fifth outpost outside of Amsterdam. The team, which started with just four co-founders, now includes more than 800 full and part-time team members.

Said Cutler: “I have known the company and the management team since the beginning and have been impressed by its unique market model in e-commerce and dramatic growth. StockX is revolutionizing e-commerce. That is why the company is one of the fastest growing technology companies in the world with a rapidly expanding global user base comprised of passionate enthusiasts; it is what sets StockX apart and why I welcome the opportunity to lead the team as we look to what’s next — extending the reach of the platform and broadening its offering to provide more users with access to an authentic, transparent, anonymous marketplace.”

For more information, or to buy and sell on the platform, visit stockx.com.