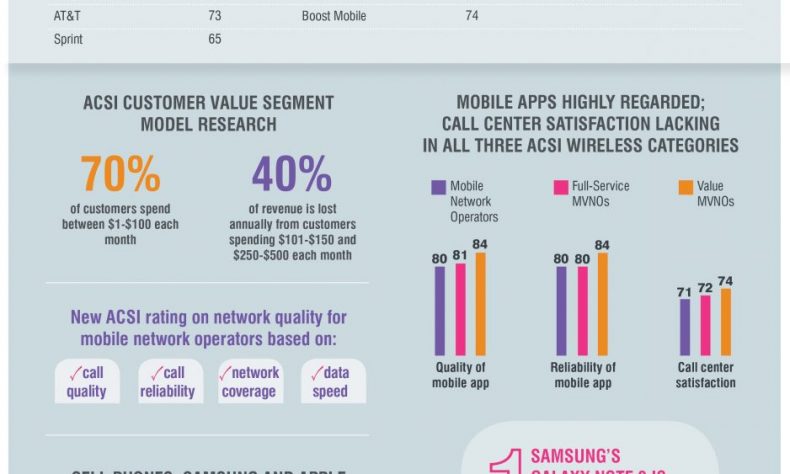 ANN ARBOR—As wireless telephone service readies for the transition to 5G service, customers satisfaction with the industry has climbed 1.4 percent to a score of 75 on a 100-point scale,  according to the American Customer Satisfaction Index’s Wireless Service and Cellular Telephone Report 2018-2019.

Smartphone sales are levelling off as more customers wait to upgrade devices. Longer phone lifecycles play a role, but there’s also an increasing desire to wait for innovations like 5G technology.

“To cope with the rapid growth of wireless data traffic, carriers are investing in modernizing infrastructure, including 5G networks,” said David VanAmburg, Managing Director at the ACSI. “Samsung’s newest Galaxy S10 smartphone is a major step toward enhanced 5G connectivity. This may help build a foundation for future 5G devices, as it will be the first time a phone can access 5G without an attachment in the United States.” 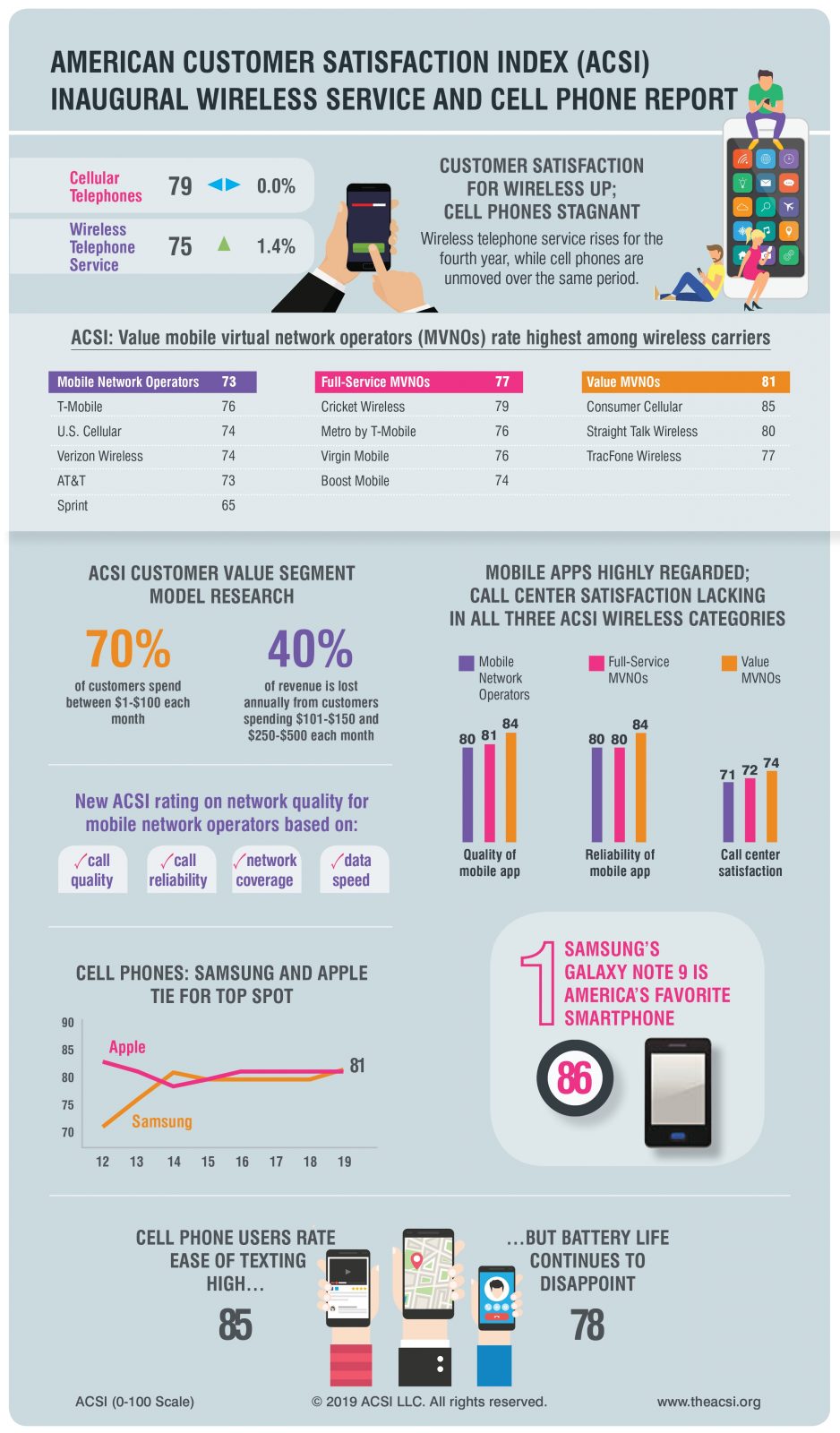 The lowest-scoring category in the wireless telephone service industry is MNOs with an ACSI score of 73. Growth of network devices slowed, while wireless revenue declines for the second straight year, falling 5 percent in 2018.

T-Mobile, which reported its best three months ever, led all MNOs in customer satisfaction with a score of 76, as it bested the competition in value and ease of billing. The carrier also outpaced the others in subscriber growth.

Although T-Mobile is seeking to merge with Sprint—the lowest-scoring network operator—to compete with the likes of Verizon and AT&T, ACSI data show mergers typically stifle customer satisfaction, at least in the short term.

Verizon Wireless and U.S. Cellular tied for second place at 74. AT&T matched the category average with an ACSI score of 73.

While Sprint finished last at 65, it exceeds new subscriber expectations thanks to promotions and giveaways. However, Sprint lost 189,000 monthly phone subscribers during its fiscal fourth quarter—the carrier’s most valuable customers—and its mobile app rates last in the category in both quality and reliability.

The ACSI introduced a new rating of network quality based on customer evaluations of call quality (clarity and strength), call reliability (dropped calls), network coverage, and data speed. Verizon Wireless led this category with a score of 80. AT&T is next at 78. T-Mobile and U.S. Cellular score 77, respectively. Sprint again brings up the rear with a network quality score of 72.

MNOs thrive at in-person customer service: Staff courtesy and helpfulness is the highest-scoring aspect of the customer experience at 81.

MNOs succeed with mobile apps as well. While scores vary widely among companies, the category comes in at 80 for both quality and reliability. Customers prefer mobile apps to websites, with website satisfaction scoring slightly lower at 79.

Customers admit the worst aspects of network service are data speed and call centers, which score 76 and 71, respectively.

With an ACSI score of 77, customer satisfaction with full-service MVNOs is dramatically higher than the rating for MNOs.

Metro by T-Mobile and Virgin Mobile (a subsidiary of Sprint) tied for second place at 76, while Sprint’s Boost Mobile came in last with score of 74. Boost Mobile’s issues may lie in device compatibility; services will only work on Boost Mobile devices and some certified Sprint devices. ACSI data show Boost ranks lowest in the category in terms of dropped call frequency.

Full-service MVNOs do well in most aspects of the customer experience. Straightforward payments are vital for prepaid customers and ease of billing held the top mark of 85. Mobile apps scored well in terms of quality (81) and reliability (80). In-person customer service is also a plus for the category, with staff courtesy and helpfulness at 82 and service speed at 80.

According to customers, call centers are the poorest aspect of full-service MVNOs, with a score of 72.

Customer satisfaction with value MVNOs is the highest among the wireless categories at 81. Consumer Cellular, which led the category with an ACSI score of 85, also tops all carriers across the board. Its customers appreciate the ease of billing that comes with offering no-contract, postpaid service and discounts to AARP members.

Straight Talk Wireless came in second at 80. TracFone Wireless finished last with an ACSI score of 77 and lags behind for data speed and reliability.

Value MVNOs score an industry-best 89 in billing. In general, these customers have a higher regard for all aspects of the customer experience compared to customers of both full-service MVNOs and MNOs.

All elements of the value MVNO customer experience score in the 80s, save for call centers, which score 74.

The ACSI also asked respondents how much they spend each month for their wireless service. The Customer Value Segment Model allows differentiation among customer groups based on how much each spends on their wireless service, along with variation in satisfaction and loyalty. The model then targets those segments where the financial return from investing in better customer satisfaction is strongest.

Following a 1 percent jump, Samsung moved into a first-place tie with Apple at 81, despite smartphone sales dropping for both companies. Apple iPhone sales were down 17 percent for the first quarter, a potential issue for Apple as ACSI data show the company’s value is lacking compared to other manufacturers.

Among brands, Samsung’s Galaxy Note 9 is now America’s favorite smartphone with an ACSI score of 86. Customers like the powerful Android model, with its large screen and broad capabilities.

“As Samsung’s newly released Galaxy S10 5G smartphone hits the market, it will be interesting to see how this first step and the bigger 5G rollout impacts both customer perceptions and the ACSI rankings next year,” said VanAmburg.

Customer experience showed little improvement over the last year. Cell phones are generally easy to use, with text messaging earning the top score at 85. Despite being the only area to improve year over year, battery life (78) finished last among customer experience benchmarks.

The ACSI was developed by Claes Fornell, Donald C. Cook Distinguished Professor Emeritus of Business Administration at the University of Michigan Ross School of Business.