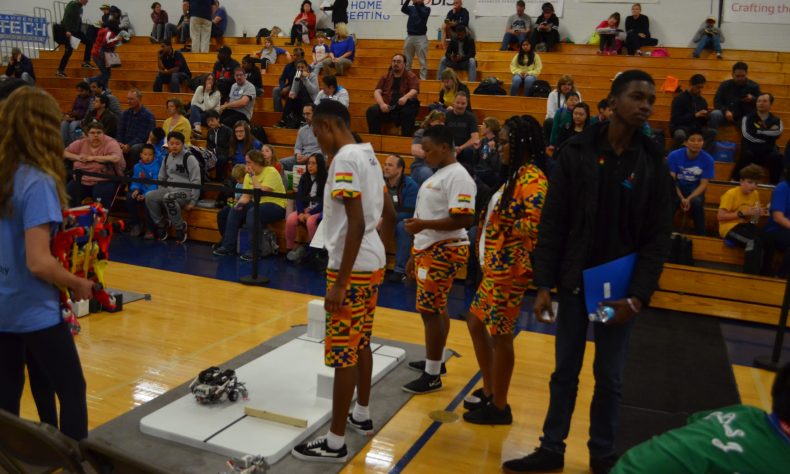 Taking second place were the Teqq Televisors, a team from Hyderabad, India, while third place went to team Joe Bots of Troy, Mich.

In the Junior Game Division for grades 5-8, first place went to the Robobuilders of Novi, Mich, with second place to team JABs of Aurora, Ill., and third place to Robowarriors of Troy, Mich.

Robofest was invented in 1999 by LTU computer science professor C.J. Chung, and since inception has seen more than 28,000 students compete worldwide. Robofest features robots that are completely autonomous—controlled solely by software, not remote-controlled by joystick—and has low barriers to entry, with a $50 entry fee and a robot kit that costs approximately $400.

Robofest is also seven competitions in one. A Game competition, which changes every year, is the most popular event, but there are also competitions in Bottle Sumo, a simple game in which robots try to push each other or a 2-liter pop bottle off a table; RoboParade, in which robots are judged on elaborate decorations as well as their ability to stay on a path; RoboArts, in which robots are programmed to accomplish artistic objectives like music or dance; the Unknown Mission Challenge, in which students are given a task to complete with limited time to build a robot and write the software to accomplish it; the Vision Centric Challenge, a competition for high school and college teams in machine vision; and the Exhibition, where students dream up any task they choose, and design and program a robot to accomplish it.

In all, approximately 600 students competed at LTU in Robofest events from May 16 to May 18.

In other competitions decided Saturday, the winner of Junior Exhibition was PCMS, from Pui Ching Middle School in Macau, a former Portuguese colony now a semi-independent part of China. Winning the Senior Exhibition category was Aurora, from the Baptist Lui Ming Choi Secondary School in Hong Kong. Winning Senior RoboArts was Visual Muzic, a team from Escuela Preparatoria Numero Unio in Metepec, Mexico. Winning Junior RoboArts was Golden Brains, a team from Genio Tech school in Alexandria, Egypt. Sweeping the Vision Centric Challenge at both the high school and college levels were teams from the Robot Institute of Hong Kong.

“Robofest is an integrated learning environment to provide talented workforce for the upcoming fourth industrial revolution era,” said Chung, who is also leading LTU’s autonomous vehicle project, ACTor, or Autonomous Campus Transport. “And as this impressive list of winners shows, Robofest is also truly a global celebration of fun competition and STEM education.”

For complete results of all competitions, visit www.robofest.net.

One thought on “Team from Ghana wins Robofest at Lawrence Tech”