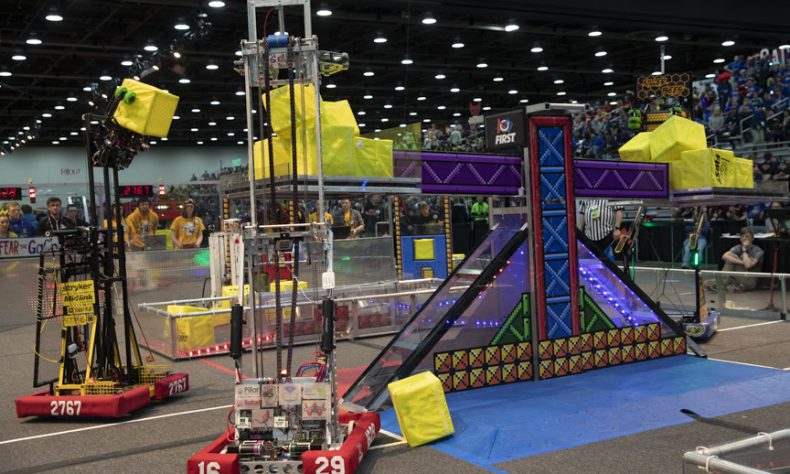 DETROIT—Metro Detroit’s hospitality community will roll out the welcome mat for the second year as the FIRST Robotics Championship rolls into town this week. More than 50 hotels throughout the region will host the 40,000 students, families and coaches from across the globe that attend and participate in this global competition at Cobo Center.

Officials at the Detroit Metro Convention & Visitors Bureau, who booked the championship for three years beginning in 2018 and running through 2020, said the local tourism community is thrilled to have FIRST in town and that preparations for the group started in 2015 when the contract was signed.

“The hotels, restaurants, transportation providers, attractions and other services benefit tremendously from this group, which contributes more than $40 million annually into our local economy,” said Larry Alexander, president and CEO of the DMCVB.  “It is our intent that the Detroit experience is among the best that FIRST has ever had and that we can convince them to extend their run indefinitely here.”

Alexander said the logistics of hosting a group of this size are extensive, with the coordination of 50 regional hotels and transportation to and from Cobo Center. The Bureau team ensures that guests are welcomed from the minute they land at Detroit Metro Airport with digital signage; welcome posters and banners at the airport and in hotels and restaurants; street pole banners along Jefferson Avenue; maps; and a “Show it and Save” program featuring discounts to dozens of local restaurants, tours and retail outlets.

More than 100 volunteers worked at Detroit Metro Airport, Cobo Center and hotels welcoming and providing wayfinding services. The Downtown Detroit Partnership and its sponsors are activating downtown parks and public spaces with family friendly activities. A temporary stadium with 20,000 seats has also been erected in Cobo Center.

“The FIRST Championship brings as much excitement and energy to Cobo Center as an Olympic Games event would,” said Claude Molinari, Cobo Center general manager. “The 2.4 million square-feet of the venue cannot contain the cheers and enthusiasm of the students and spectators.”

For more information about FIRST in Detroit, the website is https://www.firstchampionship.org/detroit.

The Detroit Metro Convention & Visitors Bureau (DMCVB) is a private, not-for-profit organization established to market the Detroit area on a worldwide basis as a destination for leisure and business travel, including conventions, trade shows, corporate meetings, tours, and incentive travel, to maximize additional visitors, visitor expenditures, state and local tax revenue, and job opportunities.  More than 700 businesses are represented in the DMCVB’s membership. The DMCVB was founded in 1896 as the world’s first convention and visitors bureau. More at visitdetroit.com.