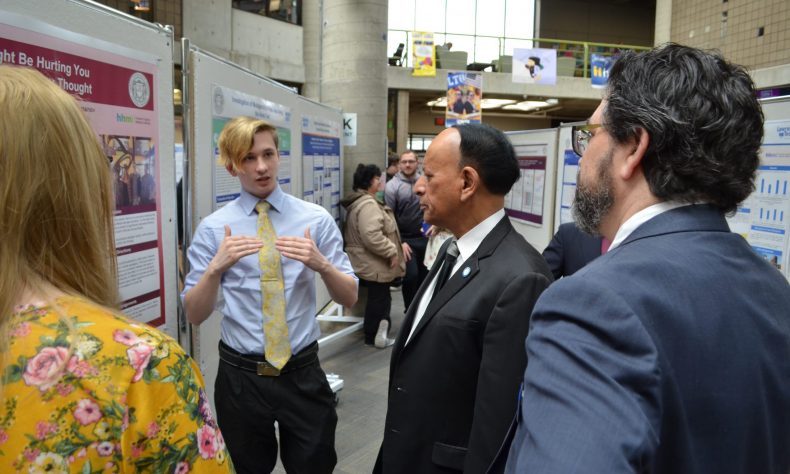 LTU faculty and students made 17 oral research presentations Friday morning, and an afternoon poster session—moved to larger quarters in the LTU’s Buell Building—featured 95 posters, for a total of 112. That’s up from 102 presentations a year earlier, according to Research Day chairman Matthew Cole, associate professor in LTU’s College of Business and Information Technology.

Topics presented varied widely, from experiments in particle physics, to sports injury prevention, to wind turbine design, to the development of flying and hopping robots, to an analysis of the U.S. roofing industry work force, to mathematics teaching techniques.

The presenting sponsor of Research Day was the Howard Hughes Medical Institute. LTU is one of only 23 schools across the country, and the only one in Michigan, to receive an HHMI grant to boost diversity in scientific and technical fields through increased involvement of undergraduates in research, particularly undergraduates from historically under-represented populations.

LTU President Virinder Moudgil called Research Day “a transformational event for this university. The level of talent on display here today has always existed at LTU, but we did not have the formal platform to present it until Research Day was established. You can really feel the excitement and enthusiasm of our young scholars and researchers, as well as their faculty mentors. Best of all, at LTU, there are opportunities for undergraduates—as early as freshman year—to do significant, groundbreaking research.”

Added Cole: “When architecture professor Joongsub Kim and I started Research Day seven years ago, our goal was to support Dr. Moudgil’s vision of creating a research culture at Lawrence Tech by bringing faculty and students together to create an interdisciplinary celebration of research. Each year Research Day has met this goal, and this year’s event was the biggest best yet.”

More about LTU’s efforts in course-based research efforts at www.ltu.edu/blogs/cre.

Research Day also includes the LTU Presidential Colloquium, in which a faculty member is honored for their research efforts with a keynote presentation. This year’s honoree was Robert Fletcher, professor in LTU’s A. Leon Linton Department of Mechanical Engineering.

Fletcher’s presentation was titled “People, Relationships, Connections, and Timing…One Professor’s Research Path.” Fletcher highlighted the people who influenced him in his career and research, starting with a beloved high school chemistry teacher. Several faculty members at the University of Washington also guided his path as a double major in music and engineering—including the brutally honest music professor who told him he probably wasn’t a good enough trumpet player to make a career of it, and the equally honest engineering professor who told him, when it came to a career in engineering, “I think you can do this.”

Fletcher also credited his doctoral adviser at the University of Michigan who guided him through a career switch from medical devices to power systems to college professor in the 2000s, a time when much of the buzz in renewable energy centered around hydrogen fuel cells. In the early 2000s, automakers predicted there would be millions of fuel cell cars on the road by 2010. Yet in 2019 there are virtually none. The reason for this? “Technology took a turn,” he said. “Batteries became very inexpensive.” But in the fuel cell heyday, meetings with federal, state, and utility officials led to Fletcher coming to LTU as the founder of its alternative energy programs.

Today Fletcher and his students continue research on hybrid vehicles and energy systems. Since joining LTU he said he’s brought about $1.7 million in research funding to the university, much of it from the corporate sector and the military, which means it hasn’t led to many papers published in peer-reviewed scientific publications.

But he said research—of any and all types—is vital to the mission of a university.

“Research is critical,” he said. “It is absolutely mandatory for a university to survive. And it can take a lot of different forms, but it is critical. Not because of the number of papers that get published, even though that is important—but because of the people it can impact and benefit. You get to help people. And that’s fun.”