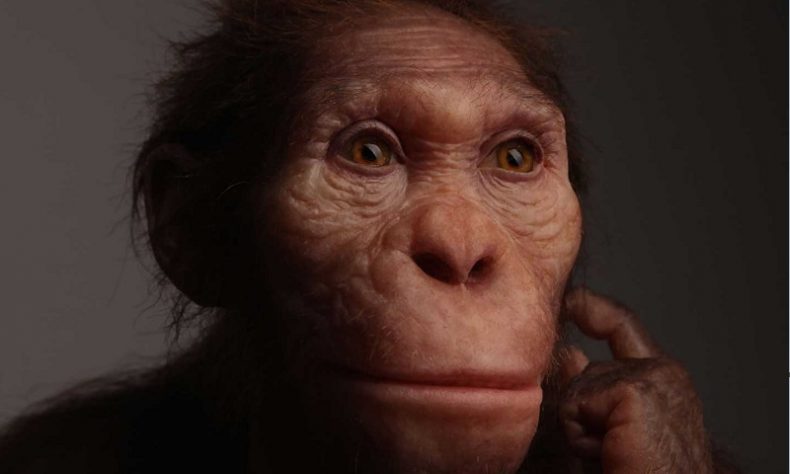 ANN ARBOR—Australopithecus sediba, an extinct relative of humans that roamed southern Africa 2 million years ago, is settling into her home at the new University of Michigan Museum of Natural History.

The life-size, hyperrealistic sculptural reconstruction of A. sediba was installed in the museum’s “Evolution: Life Through Time” gallery. Museum visitors will get their first glimpse of the diminutive hominid when the relocated museum opens to the public Sunday, April 14, inside UM’s Biological Sciences Building.

The sculpture is believed to be the only full-body, fleshed A. sediba reconstruction in North America.

“When visitors come face to face with her, they’ll be floored by how realistic it appears,” said Michael Cherney, the museum’s on-staff paleontologist. “They’ll be walking through the evolution gallery, and all of a sudden they’ll be staring into the eyes of something that’s very human-like. It will be almost impossible to ignore.”

The one-of-a-kind reconstruction was commissioned by the UM museum, and was created by the Daynès Studio in Paris. The adult female stands fully upright and is just 45 inches tall. The hairy body is recognizably human, but the head is chimp-like. The reconstruction is based on fossil bones recovered from a South African cave in 2008.

A panel of UM experts advised the museum on the acquisition, saying the bones indicated the species stood upright, like humans, not crouched at the hip and knee like chimpanzees and gorillas.

In a 2010 Science paper describing their find in South Africa’s Malapa Cave, members of the discovery team suggested that A. sediba represents a new species transitional between australopithecines and our own genus, Homo.

But some other scientists say that’s probably not the case and that A. sediba is likely not a direct ancestor of modern humans. Even so, A. sediba demonstrates that a variety of human-like creatures once roamed Africa, Cherney said.

Displayed alongside the sculpture in the new museum will be a cast A. sediba skeleton made from the bones of two specimens recovered in Malapa Cave. The composite skeleton was made from the nearly complete skull of a juvenile male and the mostly complete postcranial skeleton (meaning all the bones behind, or posterior to, the cranium) of an adult female.