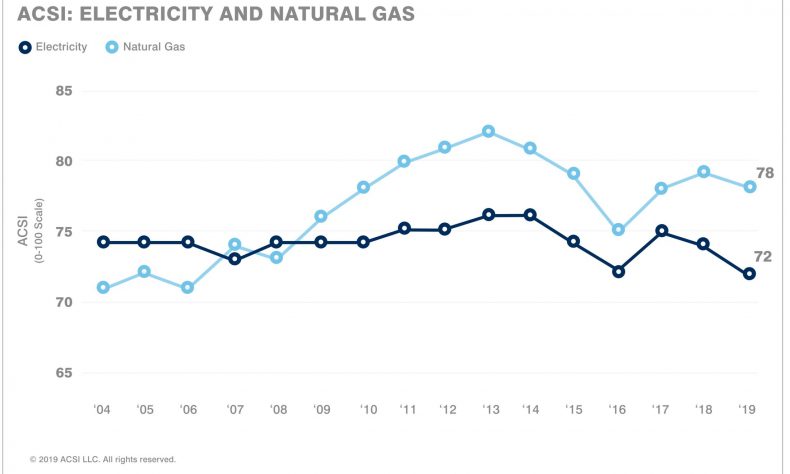 ANN ARBOR—Following a slight bump in 2018, residential customer satisfaction in the energy utilities sector has taken an about-face one year later, according to the American Customer Satisfaction Index (ACSI) Energy Utilities Report 2018-2019.

While U.S. natural gas production is at an all-time high and electricity generation from renewable sources is growing at a record rate, customer satisfaction with gas and electric service providers fell 2.7 percent to a score of 73.2 on a scale of 0 to 100.

“Higher prices and extreme weather are the biggest culprits behind this sector-wide drop in customer satisfaction,” says David VanAmburg, managing director at the ACSI. “Customers are also upset with the decline in electric power reliability. The energy utilities sector needs to take a hard look in the mirror, as the pressure mounts to upgrade and strengthen the grid.”

Natural gas lost ground this year, yet remains the preferred energy source for households, with an ACSI score of 78. Electric power can’t keep up and trailed with a mark of 72.

The ACSI results comprise three categories of energy utilities: investor-owned, municipal, and cooperative. Despite falling 2.6 percent to an ACSI score of 75, cooperative utilities held the highest customer satisfaction among the three groups. Investor-owned utilities and municipal utilities suffer an even greater drop-off, with both falling 2.7 percent to tie at 73.

This year nearly every investor-owned utility company experienced a year-over-year drop in customer satisfaction, but CenterPoint Energy, despite its 2 percent decline, remained at the top of the category. The Houston-based utility gained 77,000 new gas and electric utility customers in 2018 and finished with an ACSI score of 80.

Atmos Energy and Consolidated Edison tied for second place at 78, with the former slipping 3 percent and the latter remaining unchanged over the past year.

NextEra Energy is one of the few companies to experience an increase in customer satisfaction, inching up 1 percent to 77. WEC Energy, Excel Energy, and Exelon also rose 1 percent to 76, 74, and 73, respectively.

PPL took a 6 percent hit, dropping to an ACSI score of 73. American Electric Power, which tumbled 7 percent (the biggest decline in the category), and Eversource Energy (down 3 percent) finished tied at the bottom with a mark of 68.

Despite challenges from the wildfires that took place during ACSI data collection, PG&E remained stable year over year with a score of 70. The California utility filed for Chapter 11 bankruptcy after these customer interviews took place.

Investor-owned utilities were weaker in all aspects of the customer experience this year. The lowest-scoring aspects of utilities revolve around perceptions of good will, as efforts to support the local community (70) and green programs (70) fall short of expectations.

Salt River Project clearly outpaced the competition in spite of a 3 percent slide to 78. The combined score of all small providers dropped 3 percent to 73, good enough for second in the category. CPS Energy followed, down 4 percent to 72, with the LA Department of Water & Power bringing up the rear with an ACSI score of 69 (a 1 percent dip from the year before).

The customer experience benchmarks sink nearly across the board. Customers are especially disappointed in the lack of energy-saving ideas (71) and support for green initiatives (70). In terms of electric service reliability, however, municipal utilities (85) outranked both investor-owned (80) and cooperative utilities (83).

Smaller, rural cooperatives experienced a 1 percent uptick in customer satisfaction to an ACSI score of 77. This marks a third straight year of improvement for these cooperatives.

Touchstone Energy did not fare as well, slumping 3 percent to 75.

While the cooperative utility category as a whole declined 2.6 percent in overall customer satisfaction to 75, it still tops municipal and investor-owned utilities.

Results are based on interviews with 21,646 residential customers, chosen at random and contacted via email between Jan. 16 and Dec. 25, 2018. Customers are asked to evaluate their recent experiences with the largest energy utilities in terms of market share, plus an aggregate category consisting of “all other”—and thus smaller—companies. Download the full Energy Utilities Report.