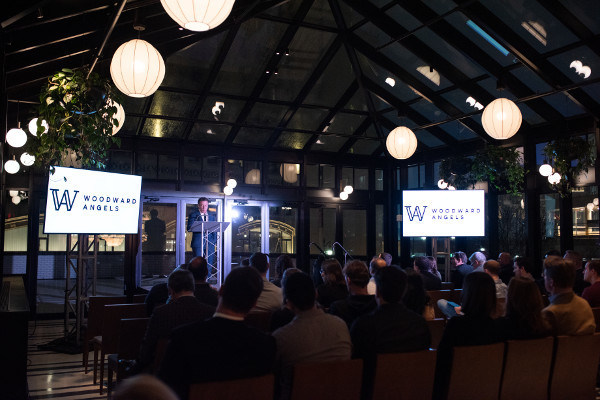 Woodward Angels is launching as an affiliate of Grand Angels Holding Co. LLC, the holding company for Grand Angels, and the Michigan Capital Network, which includes both Grand Angels and a Kalamazoo affiliate, Ka-Zoo Angels.

Angel investors are generally affluent individuals who provide capital for a business start-up, usually in exchange for stock in the new venture, or debt that can be converted into stock if the business is successful.

In Woodward Angels’ case, membership in the new group requires a commitment to invest a minimum of $25,000 per calendar year in Detroit area startups. In return, the angels receive access to a pre-screened flow of potential startup deals. Startups will be presented to Woodward Angels members in pitch meetings every two months, the first of which took place Feb. 20 in downtown Detroit.

Dan Gilbert, who turned a small mortgage lending company, Rock Financial, into a national business empire, is part of the Woodward Angels effort.

“As Detroit continues to evolve into a leading technology hub, it is important that the local startup ecosystem has all of the elements necessary to remain competitive and increase the likelihood of success for entrepreneurs who locate to the city,” Gilbert said.

For additional information about membership and startup pitching, visit woodwardangels.com.

Founded in 2004, Grand Angels is a group of accredited investors who are committed to using financial, intellectual and social capital to build a strong entrepreneurial ecosystem that enhances the economic development of Michigan. Grand Angels’ third committed capital fund, the Grand Angels Venture Fund III, was launched in 2018.  They launched the Michigan Capital Network in August 2017, by opening the Ka-Zoo Angels.