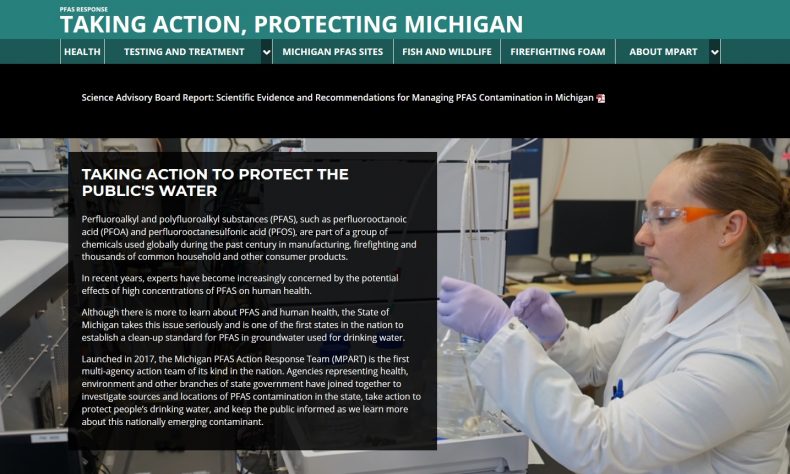 LANSING — Only two out of 1,592 water samples tested by the Michigan Department of Environmental Quality tested above federal standards for per- and polyfluoroalkyl substances (PFAS). The $1.7 million study is the first of its kind in the nation.

The test for perfluorooctanoic acid (PFOA) and perfluorooctanesulfonic acid (PFOS) individually or combined in drinking water showed levels above the EPA Lifetime Health Advisory of 70 parts per trillion for the city of Parchment’s municipal water system, and Robinson Elementary School near Grand Haven.

MDEQ tested 1,114 public water systems in Michigan, along with 461 schools that operate their own wells and 17 tribal water systems.

“This first-in-the-nation study of all public water systems in the state has resulted in 3,000 people in Parchment and an additional 300 students and teachers at Robinson Elementary being protected from high levels of previously unknown PFAS contamination in their water supply,” said MDEQ Director Liesl Clark.

These findings have also led to environmental investigations and protections for many families on their own wells in the affected areas. The Parchment system was connected to the city of Kalamazoo’s municipal water system in August 2018. Robinson Elementary is currently supplied with bottled water and plans to install a carbon filtration system later this year.

In addition to public water systems, schools, and tribal systems, the MDEQ has expanded its PFAS testing to include 168 childcare providers and Head Start programs in the state that operate their own wells. To date, 152 of these test results have been received and 89 percent have been non-detect, 6 percent less than 10 ppt, and 5 percent at 10 ppt or higher for total PFAS. None have been above the federal limit of 70 ppt.

Clark also announced today that MPART will pay for quarterly monitoring this year of municipal systems, schools and daycares with total PFAS levels of 10 ppt or higher. The MDEQ will oversee the continued sampling of 35 municipal systems, 19 schools and 8 daycares. The MDEQ will also take initial samples of 12 Head Start programs that were closed for the winter and three community water systems that could not be scheduled in 2018.

There is dispute over whether the 70 ppt limit is low enough to protect health. David Savitz, professor of epidemiology at Brown University and chair of a science advisory panel former Gov. Rick Snyder convened to study the PFAS issue, told the Detroit Free Press in December that the 70 ppt standard “may not provide a sufficient margin of safety” for public health. Savitz said it is “within a range that it is certainly possible that there would be adverse health effects.” Bob Allison, deputy director of the nonprofit Michigan League of Conservation Voters, added that “this is what we have said all along, what leading scientists and toxicologists have said all along, that 70 parts per trillion is entirely too high to protect public health, especially for children and the unborn.”

PFAS were once widely used in nonstick cookware, firefighting foam, waterproof clothing, food packaging, and other consumer products. There is scientific evidence that the compounds affect the growth, learning, and behavior of infants and children, interfere with fertility, increase cholesterol levels, damage the immune and hormonal systems, and increase cancer risk.

The state’s MPART investigation includes sampling dozens of locations across the state, including industrial buildings, military bases, and landfills known to have used or disposed of PFAS-containing materials MPART is now investigating more than 43 sites with known sources of PFAS contamination across the state.

In 2019, Gov. Gretchen Whitmer strengthened MPART by reestablishing it under Executive Order 2019-3 as a permanent body within the MDEQ.