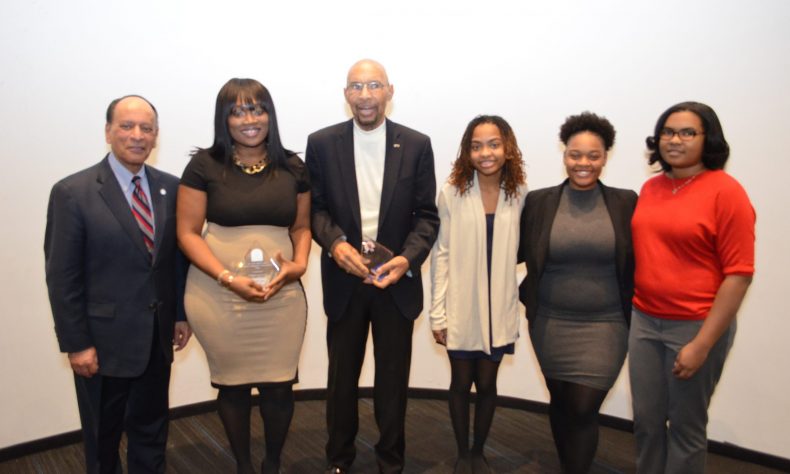 SOUTHFIELD – Despite being 7 percent of the nation’s population, black women make up less than 0.4 percent of the nation’s licensed architects – just 400 out of 111,000. That’s why Lawrence Technological University graduate and architect Tiffany D. Brown created a program to bring more information about architecture to black girls. And that’s a big reason why Brown was honored Sunday with LTU’s inaugural John G. Petty Community Champion Award.

Presented in front of an audience of more than 100, the award honors an individual who is positively impacting the lives of the African-American community, on campus and in the surrounding community. It was created by an LTU student committee as part of the university’s Black History Month observations.

Among many other career and community accomplishments, Brown created 400 Forward, an initiative to double the number of black female architects as quickly as possible, through free art and architecture summer camps for African-American girls and help in pursuing degrees. The initiative won a grant last year from the Knight Foundation.

In accepting the award, Brown said she started 400 Forward “to be the face I was looking for when I was growing up.” She said she got into architecture through art, and into Lawrence Tech through a chance visit of an LTU admissions officer to her high school.

Brown grew up in the Herman Gardens public housing development in Detroit – and now, after three degrees from Lawrence Tech and a successful career in construction management at SmithGroup, Brown is overseeing construction of the redevelopment of that site.

While working in construction management, Brown said, “I’ve been mistaken for the person who comes to clean up the construction debris… Being from Detroit has helped me develop thick skin in an industry where black women are not always welcome.”

Brown, who also works as an adjunct professor in LTU’s College of Architecture and Design, praised CoAD Dean Karl Daubmann, whom she said “understands and is completely on board with the need to change the face of architecture.”

The award is named after John G. Petty, a prominent Detroit engineer who got his mechanical engineering degree from Lawrence Tech in 1965. Petty spent most of his career at defense contracctors in the Detroit area, including Williams International and General Dynamics, where he was lead engineer on the innovative turbine engine that powers the U.S. Army’s main battle tank. He was also the first African-American president of The Engineering Society of Detroit, on whose board he served, along with the Lawrence Tech Board of Trustees.

Petty also attended the award ceremony, and in a speech, praised his LTU education. “There is a lot to be said for LTU,” Petty said. “We beat a lot of bigger universities that people think are great.”

Petty’s advice to current students – read, widely and often, and never give up. “Once you decide what it is you want to do, don’t let anyone or anything deter you from your vision,” Petty said. “Where there is vision, there is hope.”

One thought on “LTU alum seeks to ‘change the face of architecture,’ wins new university award”