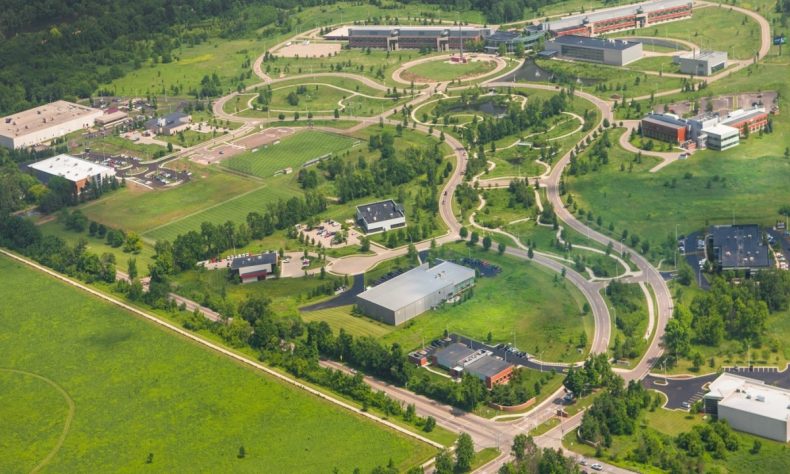 KALAMAZOO – Western Michigan University announced it will begin development of a 55-acre addition to its Business Technology and Research Park in 2019 thanks to a $2.1 million grant from the federal Economic Development Administration, a division of the Department of Commerce.

WMU officials announced the groundbreaking Tuesday. The grant will be used to build roads and utilities on the property, across Parkview Avenue from the original BTR Park.

The original BTR park, pictured above, is a 256-acre site at the end of Drake Road south of Parkview Avenue and east of US-131 that is now home to about 40 companies that provide more than 850 jobs. The park and its businesses have added close to $10 million in tax revenue for the city of Kalamazoo. Since inception, it also has provided hundreds of internships for WMU students and counts 100 alumni among its employees. BTR 1 is also home to the 323,000-square-foot WMU College of Engineering and Applied Sciences complex.

BTR 2 is north of Parkview Avenue, between US-131 and Drake Road, in Oshtemo Township. The university said initial site work will go out for bid in early 2019, with work expected to begin at some point in the first quarter.

“The Western Michigan University Business Technology and Research Park has been, and will continue to be, a partnership among the municipalities,” said Bob Miller, associate vice president for community outreach. “The city of Kalamazoo, and now Oshtemo Township, Southwest Michigan First, and the university are working together to add to the tax base, increase jobs, and offer opportunities for students and faculty.”

WMU officials said Oshteno Township played a critical role in advancing BTR 2 by sharing the cost of the site design that led to the grant from the EDA. Also partners in the effort were Southwest Michigan First, the region’s economic development agency, and the Kalamazoo County Road Commission.

“Oshtemo Township is excited to partner with Western Michigan University on the next phase of the Business Technology and Research Park, as it represents new opportunities for innovation and economic development in the township and the Kalamazoo region,” says Julie Johnston, the township’s planning director.

Planning for the park included a community advisory committee, discussions with the nearby neighborhoods and public comment solicited through social media as well as through a dedicated website. Input from these sessions led to design features that integrate the goals of the park with the natural features of the land. As part of pursuing the development, a bee colony on the site was relocated to ensure it would not be disturbed, a rare orchid on the property will be preserved in a buffer zone, the property was assessed to ensure nesting bats would not be disturbed, and diseased apple trees will be eliminated on-site, and care will be taken to ensure the illness does not spread.

Also, university officials said the portion of the Asylum Lake Preserve that is near the property will be unaffected by the development due to a buffer zone that will include public access to such features as a boardwalk, observation platform, walking path and benches. Also, a buffer zone will be established to protect mature trees with trunks over six inches in diameter and create an oak savannah, and native and low-mow turf seedings will cover much of the green space.