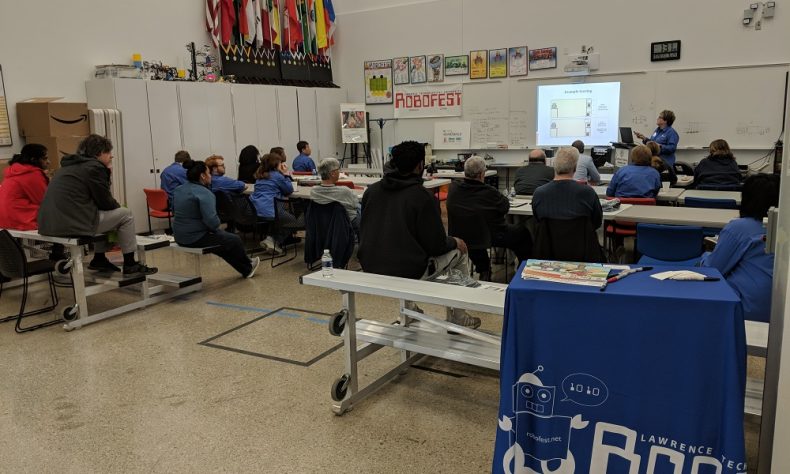 SOUTHFIELD – Robofest teams this year will see how they “stack up” against the best young minds in the world, in the new Robofest Game for 2019, “Binary Blocks.”

Officials at Lawrence Technological University, where computer science professor C.J. Chung invented Robofest in 1999, unveiled the new game Friday in a celebration of the competition for coaches and volunteers. More than 25,000 students have participated in Robofest since its founding.

In Binary Blocks, teams must develop an autonomous robot that moves and stacks black and white blocks to represent a 4-bit binary number in various taped-off squares on a 3-by-6-foot table. Points are earned based on the final location of the blocks and the robot at the end of a 2-minute competition round.

As is traditional for Robofest, there will be additional tasks demanded of the robot that teams won’t know until competition day. Teams will have 30 minutes to program their robots to achieve them.

Beginning in December and continuing through the winter and spring, regional competitions are scheduled for locations in Michigan and other states, as well as in Canada, China, Colombia, Egypt, Ghana, India, Korea, Hong Kong, Lebanon, Macau, Mexico, Morocco, Romania, South Africa, and the United Arab Emirates. The Robofest World Championship is set for May 16-18, 2019 on Lawrence Tech’s Southfield campus.

Robofest’s mission is to generate excitement and interest among young people in computer science and the science, technology, engineering, and mathematics (STEM) disciplines, develop soft skills such as teamwork, leadership, creativity, communication, and problem solving, and prepare students to excel in higher education and technological careers.

Robofest is unique among robotics competitions in that its robots must be completely autonomous – piloted only by sensors and software, not remote-controlled by gamers.

It’s also unique in that it has an “Exhibition” category, in which students are free to dream up a task that a robot can do, and then design and build a robot to accomplish that task.

Robofest is also affordable, with a team registration fee of just $50, and a basic robot kit that costs $350. Donated robot kits are also available.

Besides the Game and Exhibition categories, Robofest also includes:

For more information on getting involved in Robofest, visit www.robofest.net.