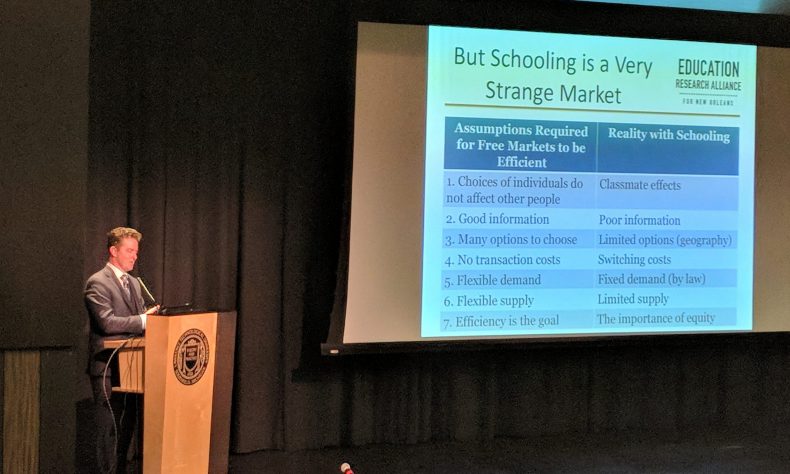 That was the word from a nationally renowned school reformer from New Orleans, who delivered the ninth annual Harold Hotelling Memorial Lecture at Lawrence Technological University Monday night.

Douglas Harris, professor of economics and Schleider Foundation chair in Public Education at Tulane University, noted that Michigan’s very lightly regulated charter school system – which has 50 percent market share in Detroit, and which has more for-profit charters than any state in the nation – has failed to raise student achievement in the city.

In New Orleans, meanwhile, schools were struggling as badly as Detroit’s when Katrina hit in 2005. (In fact, Harris said, the New Orleans schools were so corrupt that the FBI had a field office in the school district, and it was discovered that thousands of people were drawing paychecks from the school who did not work there.)

Then Katrina hit New Orleans on Aug. 29, 2005. Schools were closed the entire fall semester. And when they reopened, all but five of the city’s 126 public schools were taken over by a Recovery School District created by state law in 2003. Within a decade, the schools had been turned over to nonprofit charter operators, although the recovery district retained tight control over curriculum and discipline. Union contracts and tenure provisions in the district were abolished.

“It’s managed competition – a hybrid of government and markets,” Harris said. “There’s strong oversight and accountability from the central single authorizer. They control what kind of schools open and where they open.”

The result, after 12 years? Science and social studies scores have increased substantially, while mathematics and reading scores also rose, though not as much. There was also a 15 percentage point increase in college attendance, and the city schools’ performance rose from the 22nd percentile to the 37th percentile nationally.

The district has moved aggressively to close underperforming schools as well, having closed about 40 schools over 10 years.

Harris noted that New Orleans had unique advantages after Katrina, including an almost “missionary zeal” to rebuild the city after the gut-wrenching devastation. And New Orleans is not a complete success — there is now high teacher turnover, and performance still isn’t in the top half of the nation. And, he said, in most of America, “maybe school districts aren’t so bad after all – in most places they work fairly well.”

And in places where many schools don’t work, like New Orleans? “Even though New Orleans worked, I’m not sure that’s going to work in other places,” Harris said. “The question is, what do we do when districts fail? What do we do when it’s like New Orleans, when it’s so corrupt that the FBI has a field office in the schools, and the school district is sending out checks to thousands of people who don’t work there? That cannot be allowed to continue.”

Despite the fact that charter school innovation works in many areas, Harris said, government retains a crucial role in education oversight – including accountability and enforcement.