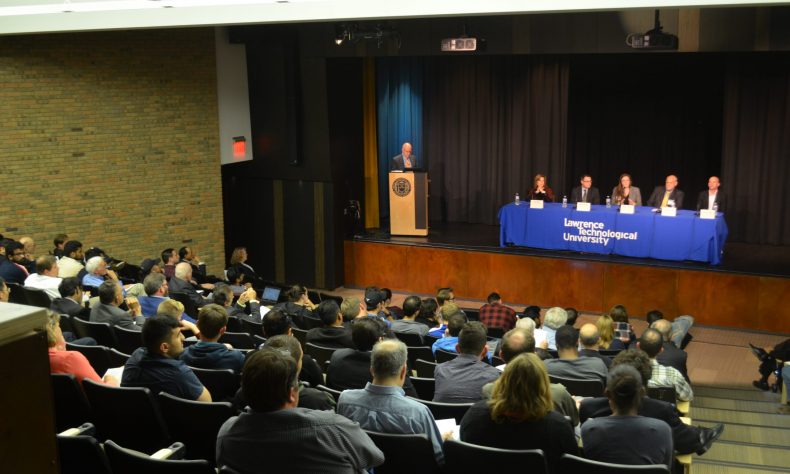 SOUTHFIELD — A future in which computer-driven electric cars whisk us around in total safety was the automotive future envisioned by a panel discussion at Lawrence Technological University Thursday night.

On the topic “Accessibility, Mobility, and Connectivity: The Edge of Future Transportation Systems,” panelists at the sixth annual President’s Symposium mostly saw vehicle electrification and autonomy as the inevitable future, when asked by panel moderator Kirk Steudle, the retiring director of the Michigan Department of Transportation and a 1987 Lawrence Tech graduate.

The lone holdout was Douglas Patton, former North American chief technical officer at Denso North America, who predicted the internal combustion engine (ICE) will survive well into the mid-21st century. He said even in nations where internal combustion engines are being outlawed, plug-in hybrids that use ICEs to charge their batteries are being considered as electric vehicles. Diesels will also continue to rule the roost for heavy trucks, too.

Other panelists agreed. Carla Bailo, CEO of the Center for Automotive Research, a nonprofit, independent automotive think tank based in Ann Arbor, said the goal was zero — zero accidents, zero fatalities, zero carbon footprint, and zero stress. She pointed out that 95 percent of auto accidents are caused by human error, and American traffic deaths are “the equivalent of a 747 crashing every day.”

Safety features like adaptive cruise control, lane departure warning systems and automatic emergency braking are steps toward autonomy, she said, but 65 percent of car buyers turn them off, “because they’re beeping at people and it’s annoying.” She said automakers and dealers have to do a better job of selling the advantages of those systems.

Bailo said she’s asked automakers what they’ll be selling when people don’t drive any more. The answer is the overall user experience, not handling or power, she said.

Bailo and other panelists also predicted a shift from car ownership to car “usership.” She said that “the idea of spending $750 a month for a vehicle that sits in your driveway or garage 95 percent of the time is no longer appealing.”

Mark Chaput, vice president of the American Center for Mobility (ACM) and also a 1987 LTU graduate, touted ACM’s facilities as a huge testing ground for autonomous and connected vehicles (ACVs), saying autonomy could cut traffic congestion that costs the American economy $160 billion a year and releases an excess metric ton of carbon emissions into the atmosphere a year.

Chaput said that besides providing a testing ground, ACM aims to standardize a Wild West of state standards on ACVs, as well as build an educational consortium for training the current work force and today’s students about the technologies involved in ACVs.

Panelist Alisyn Malek is COO of May Mobility Inc., a company that did not exist two years ago but is now operating driverless six-passenger shuttles in Detroit and other cities. She said her company is focused on the “first mile and last mile” for commuters, getting them from central parking areas to homes and workplaces. “In transportation, we need to move beyond the arteries and consider how we move in the capillaries as well,” she said, adding that she didn’t think it was feasible for fully autonomous vehicles to be on the road as quickly as some proponents say.

Jeremy Tuggle, engineering manager for systems engineering and testing at Continental Corp. in Auburn Hills, also said autonomy was important to a zero-accident future that cuts carbon pollution. He said increasing connectivity and faster data processing will allow “e-mobility.” He predicted a future of highly automated personal vehicles for long trips and shared, self-driving taxis for getting around cities.

In a question and answer session that followed the program, panelists said security for autonomous vehicles would be a multi-layered affair of intrusion detection, data keys, and encryption, with protocols to act quickly to protect a vehicle if a takeover attempt is detected. Tuggle also noted that careers in cybersecurity, protecting automated vehicles from hacking, is a great career opportunity for today’s students.

Panelists also said research work needs to continue on autonomy to increase safety and consumer acceptance. Bailo urged the industry to work together in this regard, noting that “when the airline industry has a crash, they all work together, investigate, and share the results.” Car companies don’t share data in the same way, she said, but they should.

Panelists also said urban planners and government can create incentives to encourage citizens to minimize sprawl and cut carbon pollution. “We can experiment,” Malek said. “Communities can set their own future.”