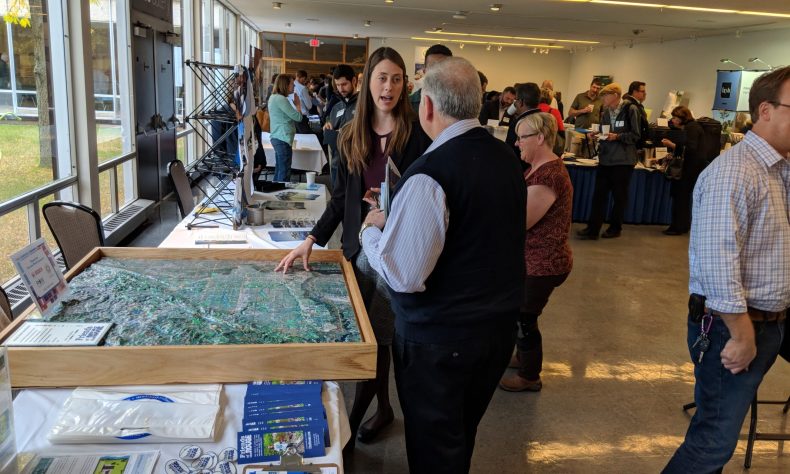 SOUTHFIELD – Stormwater runoff management may sound boring. But how does half a billion dollars sound? You might say that makes stormwater anything but a dry subject.

Attendees at a conference hosted by Lawrence Technological University learned Friday that a computer-controlled system for managing stormwater from heavy rains could save the Detroit area $500 million in infrastructure costs.

Instead, his team used sensors connected to wireless devices to monitor rainfall, the depth of water in runoff storage areas, and soil moisture, and connected them to software that makes automatic, intelligent decisions about opening and closing valves and gates of stormwater retention areas.

The technology, tested on Malletts Creek, which drains parts of Ann Arbor into the Huron River, produced an increase of 50 percent in the rainwater handling capacity of a retention basin, and a roughly 30 percent reduction in the cost of treating overflows during heavy rains – all from just $10,000 worth of electronics and equipment.

A study with the Great Lakes Water Authority to use similar controls on its massive system, which provides water and sewerage services to 127 communities in seven Southeast Michigan counties, found that using Open Storm’s sensors and software on its system could reduce 100 million gallons of combined sewage overflow in a serious storm. Kerkez said GLWA officials told him that building a 100 million gallon storage basin would cost $500 million.

The study has already won awards from the water management industry – including the $25,000 grand prize at last week’s WEFTEC 2018 water and sewer management conference. The student design competition was a joint effort of the Water Research Foundation and the Water Environment Federation.

Kerkez said installing similar systems throughout the Great Lakes could have a massive impact on the lakes’ water quality.

The rest of the conference featured presentations on using green infrastructure to handle the heavier rainfall events becoming increasingly common due to climate change and the latest on stormwater management standards. The conference also included a trade show — pictured above — of stormwater management product and service providers, consulting companies, and advocacy organizations.

Now incorporated as Microbuoy Inc., the team developed miniature sensors that measure for pathogens, phosphorous level, pH, heavy metals and temperature, powered by solar energy and miniature batteries — all in a package the size of a life preserver and costing $2,000 to $5,000, vs. traditional monitoring buoys at $40,000 and up.

The team received $40,000 in cash and $10,000 in support services at Erie Hack in August to commercialize its invention. The team has also won $15,000 in another water technology competition, Internet of H2O.

Microbuoy is also developing “smart faucets” for the home market that test tapwater for contaminants.

Presenters also praised the high school division of Erie Hack, which produced Z-Spools, an innovation from a high school student in Buffalo who studied zebra and quagga mussel shells and discovered they contain ingredients useful in 3D printing filament. She’s now trying to commercialize the research.