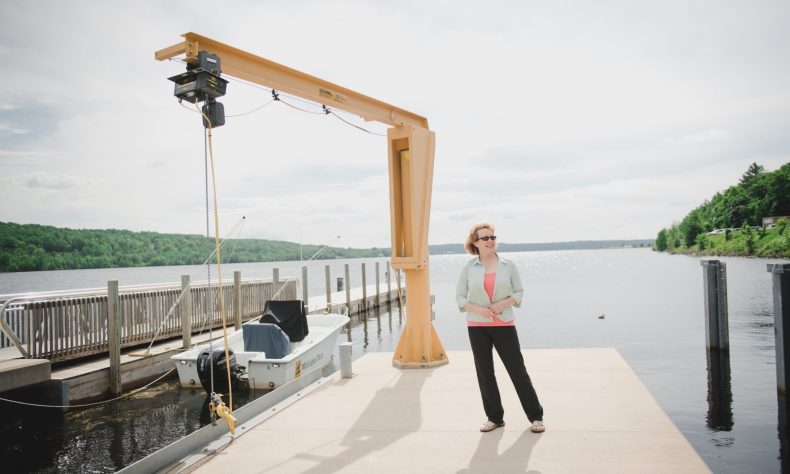 Langston — pictured above at the Great Lakes Research Center — has written four books. Her latest, “Sustaining Lake Superior: An Extraordinary Lake in a Changing World,” is echoed in the title of her talk. The thrust of her address will go deep into essential community connections: How do past actions inform efforts to preserve and protect the lake for the future?

“We face extraordinary challenges with climate change and how it affects the mobilization of toxic chemicals, people, and new demands on water resources,” Langston said. Part of meeting current and future threats to the health of the basin is recognizing that they’re not the first challenges we’ve faced. One of the most quickly deforested watersheds in North America, the interconnected pressures of mining, logging and farming took a toll on the region. Community response to issues ranging from paper mill manufacturing to trout populations has evolved over time.

“People really want to hear what they can do. They want to share their experiences of change in the watershed,” Langston said. “The fact that we have recovered so much that bears come into my garage, that we often hear pileated woodpeckers and that we see wolves – people have come to take those critters for granted, but they’re really part of a much larger story of conservation recovery.”

Langston’s talk on Wednesday is preceded by welcomes from Keweenaw Bay Indian Community Tribal Council President Wayne “Chris” Swartz, Michigan Technological University President Richard Koubek and an opening drum ceremony by Ojibwe and Menominee tribal members. The public is invited to two events: one on the Lake Superior action and management plan, from 6 to 8 p.m. Tuesday, Oct. 9, and another, from 5:45 to 7:30 p.m. Wednesday, Oct. 10, on the scientific challenges of developing a plan to protect the Buffalo Reef trout and whitefish spawning grounds off Gay, an unincorporated community along Keweenaw Bay. The reef is already more than one-third covered in migrating mine tailings from milling operations during copper mining’s 19th Century heyday.