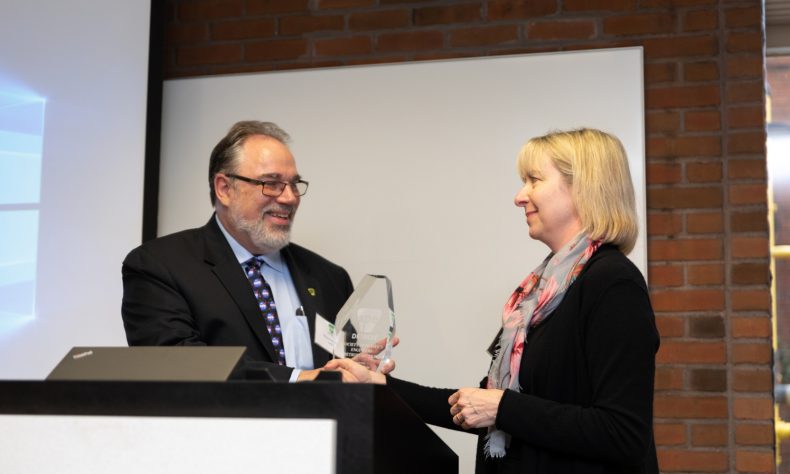 TROY — Wayne M. Hertlein has been named the Outstanding Member for 2018 by the Detroit Section of the Society of Plastics Engineers.

An SPE and SME member since 1981, Hertlein began his career in 1976 at Armin Tool in Elgin, Ill. as an apprentice moldmaker, and trained at the Tool and Die Institute in Park Ridge, Ill. He received his journeyman moldmaker and mold designer certificates in 1979, and worked full-time at Armin and part-time as an instructor at Elgin Community College in Elgin, Ill. He earned an associate degree in applied science in plastics from Kalamazoo Valley Community College in 1987, and is currently studying for a bachelor of science in engineering technology with a plastics emphasis at Lawrence Technological University.

Hertlein currently serves on the boards of directors of the SPE Mold Technologies Division (formerly the Mold Making and Mold Design Division) as its treasurer and historian and the SPE Detroit Section of which he is Immediate Past President. In addition, he served as Chair of the Mold Technologies Division in 2003 and from 2010 to 2012. Hertlein was named an Honored Service Member of SPE in 2006. Other leadership positions include chairmanship of the SME’s Plastics Tooling and Mold Design Tech Group, SME Senior Member since 1987, Advisor to the Plastics Industrial Advisory Committee at Ferris State University since 2005, where he led the establishment of the Henry Tschappat Memorial Leadership Award Endowment and the Frank Marra Memorial Endowment, and serving as an editorial advisory board member for MoldMaking Technology Magazine from 2005 to 2008 and from 2012 to 2016.

Hertlein currently works as Tooling Manager at RPC/Superfos, Letica Corp. in Rochester. The previous roles Wayne has held at various leading manufacturing companies are many, but in every case he has enjoyed
the opportunity to apply his knowledge of plastics materials, steel and mold construction materials, processing and engineering and also product design and development.

Hertlein resides in Mount Clemens, with his wife Elizabeth, and as a hobby keeps a home library of more than 8,000 textbooks and other documents relevant to the plastics engineering industry. He also supports programs that get youth interested in manufacturing, engineering and moldmaking, including the Engineering Society of Detroit’s Future City Competition, where he has served as a volunteer judge for eight years.

He also participates in the SPE Detroit Section’s annual Christmas Toy Distribution project which, for each of its 18 years, has provided between 60,000 to 80,000 plastic toys to needy children in partnership with American Plastic Toys Inc.