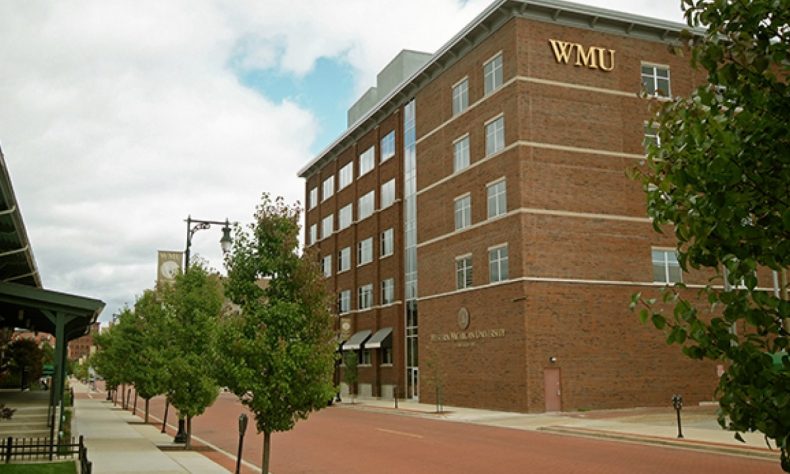 The Advanced Manufacturing Partnership Laboratory occupies the first two floors of Western Michigan University’s downtown Grand Rapids location, which is located at Cherry and Ionia streets in the city’s Arena District. Its mission is to cultivate the next generation of engineers, designers and other skilled individuals to serve the manufacturing industry.

“This cutting-edge instructional laboratory has been designed to meet the demands identified by manufacturing leaders – not only locally, but around the globe – to educate the 21st century advanced manufacturing workforce,” said WMU President Edward Montgomery.

The AMP Lab combines prototyping, training and small-scale manufacturing with the opportunity for individuals to earn college credits to be used toward a degree or certification. The facility includes 3D printers and scanners, a CAD-CAM lab, plasma cutter, laser cutter, welding station, metrology equipment, and prototyping tools.

“The AMP lab is an excellent example of how communities grow stronger when people come together,” said GRCC President Bill Pink. “We’re partnering with Western Michigan University and our region’s employers to give residents skills they need for great jobs as well as their first steps in higher education and pursuit of lifelong learning.”

“At full strength, the space will be used for six to eight WMU undergraduate courses a semester with class sizes of 16 to 24,” said Steven Butt, professor and chair of the WMU Department of Industrial and Entrepreneurial Engineering and Engineering Management. “GRCC will also be offering associate degrees and manufacturing courses. In addition to college courses, workshops, specialized trainings, product design and manufacturing consulting will occur in the space.”

The $2.7 million AMP Lab development and the equipment it houses were partially funded through private investment efforts and the Michigan Economic Development Corp. Opportunities exist for the center to be used as a makerspace for entrepreneurs needing manufacturing assistance.

John C. Kennedy, president of Autocam Medical, based in Grand Rapids, has been involved in programs to raise awareness for the education of and need for skilled workers – and for a facility that can lead to new ideas being developed for introduction into the marketplace.

“In addition to developing a skilled workforce, the AMP Lab has the potential to provide other important services to our region,” Kennedy said.  “This facility and its students, led by engineering faculty and graduate students, can help local inventors prototype projects.”

The building that houses WMU’s downtown regional location and the AMP Lab @ WMU began as the Brown and Sehler Co., a wholesale manufacturer of horse harnesses and collars, from 1925 to 1935. Various businesses moved in and out of the building for the next 40 years before H.H. Cutler Co., an infant and children’s clothing manufacturer, occupied the space until 1995. WMU moved into the building in May 2001.