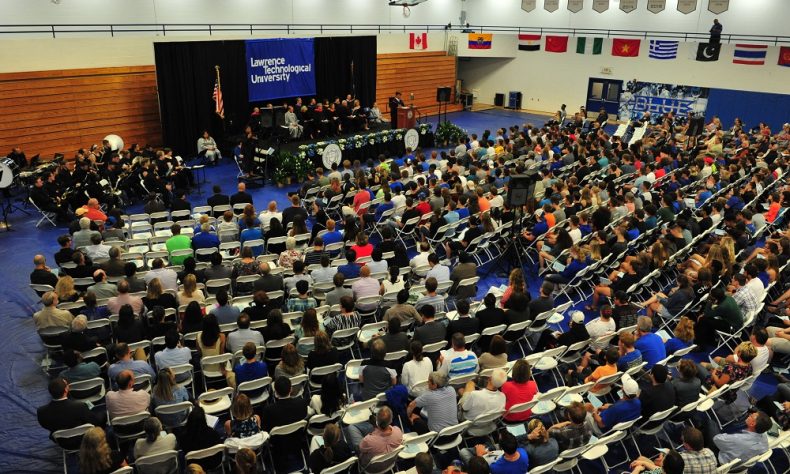 SOUTHFIELD, Mich. – James Blanchard, former governor of the state of Michigan, former U.S. ambassador to Canada, and former member of the U.S. House of Representatives, will become the fifth recipient of the Global Citizen Award to be presented by Lawrence Technological University on Saturday, Sept. 1 at the start of a new academic year.

The award presentation will be made at LTU’s annual Convocation ceremony for new students and their families, at 10 a.m. Sept. 1 in the Don Ridler Field House on LTU’s campus in Southfield.

The ceremony will be followed at noon by LTU’s first football game in more than 70 years, when the new Blue Devils football squad takes on Oakland University’s club team at the LTU Athletic Field, on 10 Mile Road, just west of Evergreen Road.

Lawrence Tech President Virinder Moudgil established the Global Citizen Award in 2014 to recognize individuals who have shown great character and leadership in addressing global issues and promoting international and social understanding. This award is given annually to a person who demonstrates the passion and energy to make a positive impact on humanity through collaborative enterprise and spirit.

The event will also mark the conclusion of the annual President’s Global Village Project for LTU students. The project will see approximately 80 LTU students experiencing different cultures and building friendships through Detroit tours, visits to religious institutions, poetry readings in native languages, and other activities over three days.

Blanchard, 76, attended public schools in Ferndale and earned a Bachelor of Arts and an MBA from Michigan State University and a law degree from the University of Minnesota. After serving as assistant attorney general for the state of Michigan, he was elected to the U.S. House in 1974 and served until 1983, after running successfully for Michigan governor, a position he held until 1991. He was named ambassador to Canada in 1993, serving until 1996. He then became an attorney for the Washington, D.C. firm DLA Piper, where he was chairman emeritus of its Government Affairs Practice Group.

As a congressman, Blanchard was noted for working on loan guarantees that prevented a Chrysler Corp. bankruptcy. As governor, he inherited a $1.7 billion deficit, but balanced eight straight budgets, improving the state’s credit rating to AA, while establishing the Office of the Great Lakes and the Michigan Education Trust, the nation’s first tuition guarantee program. He also led economic development and diversification efforts, and established a $400-million-plus “rainy day fund” for future economic hard times.

During his tenure as ambassador to Canada, Blanchard managed trade, natural resources, environmental, and national security issues between the United States and Canada, providing support critical to the passage of both the North American Free Trade Agreement and the Open Skies Agreement, which simplified passenger and cargo airline service between the two countries.