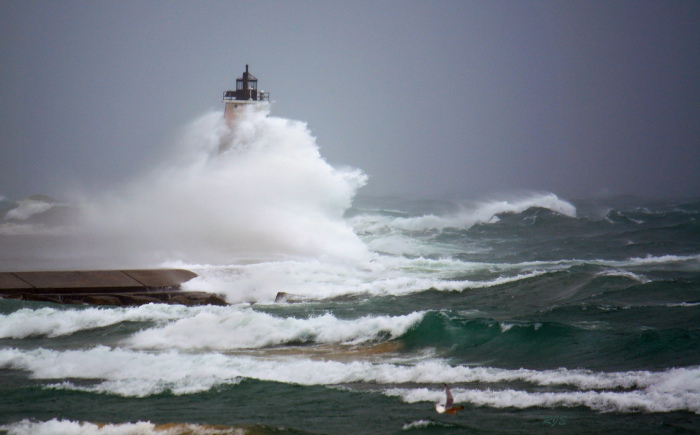 ANN ARBOR — Great Lakes researchers are establishing an experimental network of air-pressure sensors around lakes Michigan and Erie to see if they can detect potentially harmful “meteotsunami” waves.

Funding for the pilot project was provided by the University of Michigan-based Cooperative Institute for Great Lakes Research (CIGLR), which receives financial support from the National Oceanic and Atmospheric Administration.

The 29 sensors in the far-flung network will look for abrupt air-pressure changes — often associated with a line of fast-moving summer thunderstorms — that can trigger meteotsunami formation. The low-cost  system uses a mix of newly installed sensors and existing instruments on research buoys and at shoreline weather stations.

Meteotsunamis are storm-driven waves similar in some ways to earthquake-generated tsunamis, though meteotsunamis are far less destructive than the largest seismic tsunamis. On average, about 100 meteotsunamis occur each year on the Great Lakes, though most are one foot or less in height and are too small to notice.

A meteotsunami is different than a seiche, another type of potentially dangerous wave that occurs in the Great Lakes.

On rare occasions, large Great Lakes meteotsunamis have been known to cause property damage, injuries and even deaths. In June 1954, a 10-foot wave now believed to be a meteotsunami struck the Lake Michigan shoreline near Chicago, sweeping several people off piers and killing seven.

Over the past decade, efforts to develop a meteotsunami warning system have been hindered by the need for real time, high-frequency data. The new pilot project addresses that technical challenge with a network of 29 sensors, each taking one air-pressure measurement per minute.

“Another destructive meteotsunami could happen on the Great Lakes tomorrow, and we’re not ready for it,” said the project’s lead researcher, Ed Verhamme of LimnoTech, an environmental engineering and science firm based in Ann Arbor. “These rapid-response funds from CIGLR will allow us to move quickly to get the kind of observations needed to alert the public about this frequently overlooked hazard.”

The key to spotting the atmospheric precursors of a meteotsunami is the ability to detect sudden, fleeting shifts in air pressure that may last just a few minutes. But the barometric-pressure sensors on most U.S. government-operated Great Lakes weather buoys and coastal weather stations report real-time measurements just once every 10 to 15 minutes, said NOAA physical scientist Philip Chu, a member of pilot project’s research team.

“One measurement every 10 minutes or longer is just not frequent enough to be able to detect most of these events,” said Chu, who works at the agency’s Great Lakes Environmental Research Laboratory in Ann Arbor. “We need high-frequency measurements, and the instruments must report in real time to offer forecast capability.”

In the CIGLR-funded pilot project, each sensor in the network sends data in real time to a central data-management system. Ten of the sensors are on existing buoys owned by LimnoTech and various universities, and 10 are at existing shoreline weather stations operated by WeatherFlow Inc.

Four new low-cost sensors were installed along Wisconsin’s Lake Michigan shoreline this summer, and five more will be installed along lakes Michigan and Erie this fall. The new sensors are being added at places like boat launches, marinas and parks.

“You don’t need to spend $800 for an air-pressure sensor when a much cheaper sensor will do the same thing,” Verhamme said. “We can stick a pressure sensor on a light pole at a marina parking lot or a boat launch. The end result of this effort will be measurements coming in once a minute from 29 stations.”

Rapid-response funding of $11,900 from CIGLR paid for the new sensors, for modifications to computer programs on the buoys, and to create the data management system.

Data from many of the stations is already being collected and analyzed. The first test of the full 29-station network will begin next spring. Great Lakes water-level observations and a hydrodynamics model will be used to test the accuracy of the network’s predictions.

“This project shows the power of cooperative institutes like CIGLR,” said CIGLR director Bradley Cardinale, professor at the UM School for Environment and Sustainability. “We help NOAA develop partnerships with universities, private businesses and nongovernmental organizations that can quickly move important research into applications that help society.”

The rapid rise in water levels during a meteotsunami can happen within a few minutes to an hour. Sudden water-level changes can catch people off guard on piers and at beaches, damage waterfront property, disrupt maritime activities, create strong, hazardous currents, and can even disrupt the operation of shoreline power plants, according to NOAA.

In the past, some meteotsunamis have been misidentified as freak waves, tidal waves or seiches, said NOAA’s Chu. A seiche is a rhythmic oscillation of water in a lake or partially enclosed body, like a larger-scale version of water sloshing back and forth in a bathtub.

If the new pilot project proves successful, the long-term goal would be to incorporate a meteotsunami alert or warning statement into the existing National Weather Service warning system to protect the roughly 30 million people living along Great Lakes coastlines, Chu said.

“If we can show that this approach is workable and that we can actually detect meteotsunamis ahead of time, then it could be possible to retrofit or upgrade instruments on most of the coastal stations to get high-frequency, real-time measurements,” he said.