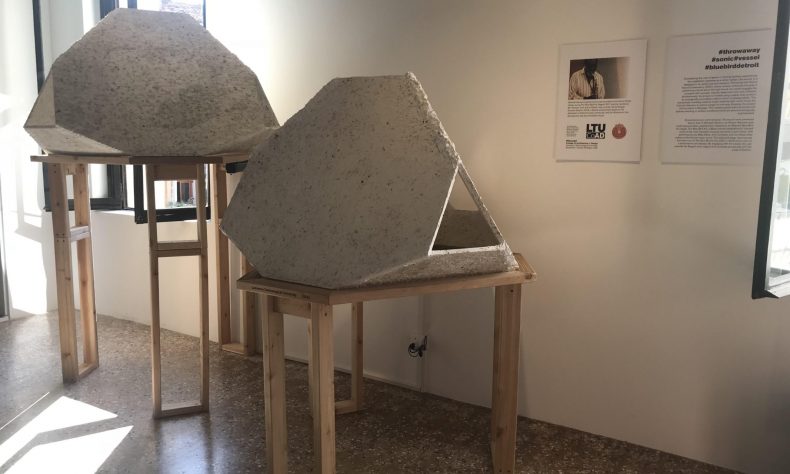 SOUTHFIELD – The intersection of design and sound is the focus of an art installation created by Lawrence Technological University’s College of Architecture and Design for an architecture exhibition in Venice, Italy.

The exhibition, called “Time Space Existence,” is being held in three grand palaces in Venice — Palazzo Bembo, Palazzo Mora and Palazzo Rossini. It’s organized by a Dutch arts and culture foundation, and is part of a larger architecture exhibition and conference called Architecture Biennale. LTU’s installation is in the Palazzo Mora.

The LTU installation is called “#throwaway #sonic #vessel #bluebirddetroit.” It consists of two human-scaled paperboard pods mounted on simple wooden stands. Once inside the chamber, the visitor hears a tenor saxophone performance by famed Detroit musician Wendell Harrison. The performance was recorded on the stage of the Blue Bird Inn, once a famous African-American-owned jazz club on Detroit’s west side. The stage has been rescued from the crumbling club, and is now a touring art exhibit. At the time of the recording, it was on display at the Detroit Public Library.

LTU partnered with the Detroit Sound Conservancy, an organization working to preserve the sonic history of Detroit, on the project.

Deirdre Hennebury, assistant professor of architecture and director of LTU’s Bachelor of Science in Architecture program, said the sound chamber is made of pressed, molded paper pulp. “It’s also completely recyclable,” she said. “We wanted something that had minimal environmental impact and would be light for shipping.”

The designers say that, like sound itself, the installation is designed to be ephemeral and transient. The paper pulp was infused with rose petals and rose oil for visual interest and a pleasant scent. The intent is for the sound chambers to be recycled in Italy, not shipped back to Michigan.

Hennebury said that once the design team settled on a theme involving acoustics and soundscapes, they contacted the Detroit Sound Conservancy. “We thought they might be able to come up with a sound that was representative of Detroit, as well as compelling,” Hennebury said.

Detroit Sound Conservancy founder Carleton Gholz said he had just the thing: a performance by award-winning multi-instrumentalist Harrison, who earlier this year was named a Kresge Eminent Artist by the Kresge Foundation.

Gholz described the DSC as “a crew of librarians and archivists and music nerds” that has been operating virtually since its 2012 founding, but which has now received Kresge Foundation funding to search for a permanent home. Of the LTU partnership, Gholz said: “We’re always looking for strong community partners. We look forward to future partnerships with architects and designers, so this is all very appropriate and important for us.”

Schmidt was sent to Venice to construct the installation before the May 26 opening of the exhibition. The installation is pictured at the top of the article.

A native of Bay City, Schmidt had been working at LTU’s makeLab digital fabrication studio since her 2016 graduation, researching materials and technologies to machine-fabricate architectural components. She is now on a year-long fellowship at Ballard International, a Pontiac robotics firm, where she works on robots that fabricate architectural components. She plans to start graduate school in architecture in the fall of 2019.

Schmidt described a real sense of camaraderie with her fellow “makers” in the palazzo. “It seems like, people who make things, we all understand the same jokes and complain about the same things,” she said.

More about LTU’s College of Architecture and Design at www.ltu.edu/architecture_and_design/. More about the installation at this LTU link.