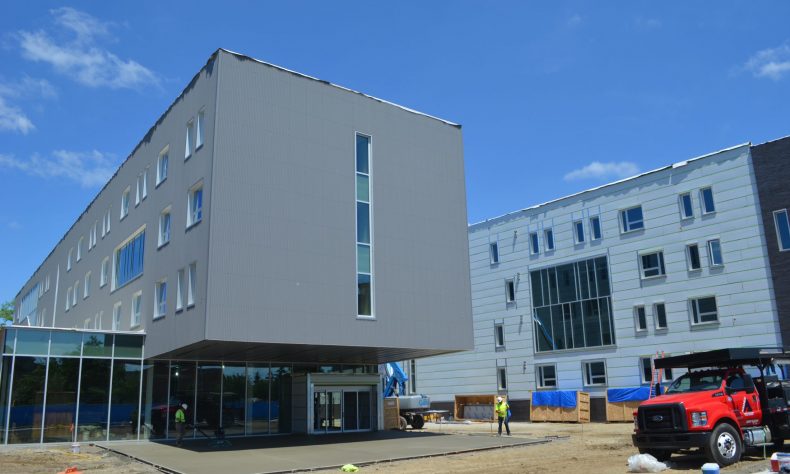 SOUTHFIELD – There’s a very sophisticated game of real estate musical chairs going on this summer on the campus of Lawrence Technological University.

Only in this game of musical chairs, everybody will get a seat when the work is completed.

Lawrence Tech is opening a new residence hall in August, its fourth (pictured above). That means more than 300 new students will be living on campus. And that means LTU’s Real Food on Campus cafeteria, located in LTU’s Buell Management Building and already stretched beyond capacity, will be even busier. The cafeteria must expand. But where to?

The LTU bookstore next door to the cafeteria was a natural choice. But then where to put the bookstore?

It’s moving one floor up in the Buell building, to the former location of LTU’s Marketing and Public Affairs and University Advancement offices.

But where will they go? As it turned out, across campus, to an office building at 21311 Civic Center Drive that LTU bought in 1994, into space occupied from 1999 to 2018 by the National Multiple Sclerosis Society’s Michigan Chapter.

That structure, soon to be renamed the University Services Building, now houses Marketing and Public Affairs and Advancement, along with its longtime tenants, Campus Facilities, Human Resources, and eLearning Services.

The University Services Building will soon get another tenant as well – LTU’s IT department, which is moving from its longtime home in the Science Building. IT’s former space will become medical laboratories for LTU’s growing nursing program, which will have more than 60 students when classes resume in August.

LTU University Architect Joe Veryser said the university “always tries to minimize impact and inconvenience to our students – thus, we try to do all our major renovation work between mid-May and mid-August.”

And LTU is working on more projects than just these during this busy summer, Veryser said. There’s also a $2 million renovation project going on at LTU’s South Residence Hall, a $1 million expansion of seating and installation of lighting at LTU’s athletic field in preparation for the addition of football – the first game is Saturday, Sept. 1 – and completion of the new, 88,000-square-foot East Residence Hall.

LTU Dean of Students Kevin Finn noted that the new LTU cafeteria “will reflect the dining style preferences of our students. They will see an increase in vegetables and fruits, as well as new and improved stations reflecting today’s dining preferences.” As for the residence hall, Finn said it would provide “great community spaces with a special focus on the learning styles of today’s students. Workshops, seminars and even classes will be able to be delivered in the students’ residence.”

Therese Jamison, founding director of nursing at LTU, said the program, in partnership with Ascension Health, “continues to flourish, with the second cohort of 32 students starting in August.” Jamison noted that LTU’s nursing students “are comprised of both men and women, with diversity in age and ethnicity,” not to mention representation from five of LTU’s athletic teams, including football.

Jamison said the new labs in the Science Building will be completed by the Summer 2019 semester and will include full simulations of various healthcare settings.