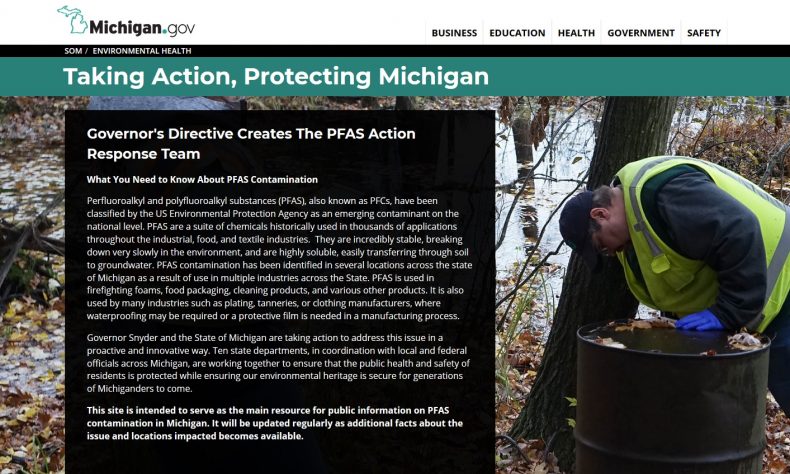 The $1.7 million survey is the first comprehensive, state-driven study of its kind.

PFAS compounds are a group of potentially harmful contaminants used in thousands of applications globally including firefighting foam, food packaging, and many other consumer products. These compounds also are used by industries such as tanneries, metal platers, and clothing manufacturers. Over the past decade, these chemicals have been gradually phased out, but years of manufacturing them, using them, and disposing of them contaminated groundwater in many areas. Th chemicals have been linked with thyroid defects, lowered immune response, increased risk of obesity, problems in pregnancy, and some cancers, even at low exposure.

The Michigan Department of Environmental Quality (MDEQ) this week began sending out letters to Michigan’s 1,380 public water systems outlining the water testing study which will be administered by the MDEQ. The goal is to complete this statewide study by the end of 2018.

In addition to public water systems, some 461 schools that operate their own wells will be considered priority testing sites under the study. Roughly 75 percent of the state’s drinking water comes from public systems.

“Michigan has moved quickly to protect people from potentially unsafe drinking water in communities with known PFAS contamination from historical industrial or military activities,” said MDEQ Director C. Heidi Grether. “MPART is taking this next proactive step to survey other parts of the state and gather important baseline data on the presence of this emerging contaminant in the environment.”

MPART is helping to coordinate the state’s $23 million effort to locate PFAS contamination, identify sources, and oversee remediation activities aimed at protecting the state’s water resources and mitigating risks to the public.

The state has already sampled water at more than 30 including industrial, military, and landfill sites known to have used or disposed of PFAS-containing materials and acted to protect drinking water supplies. In addition to these sites, many larger water systems serving multiple communities – like those in greater Detroit, Saginaw, and Grand Rapids – already sample for PFAS.

“Although acceptable PFAS exposure levels continue to be debated nationally, the right thing to do here in Michigan is advance our knowledge of this emerging contaminant,” said MPART Director Carol Isaacs. “We will share what we learn with the public and are prepared to advise communities, if necessary, on steps they can take to reduce PFAS levels in their water supplies.”

Although private residential wells are not within the scope of the study, information on independent testing and filtering options is available from MPART at www.michigan.gov/PFASresponse.

A new EPA draft study recommends a far lower level of PFAS exposure, 10 to 20 parts per trillion, saying the 70 parts per trillion standard is insufficient to protect young children and nursing mothers. Publication of the study has been blocked by the Trump administration, according to the website Politico.

According to Politico, “a study concluding that the chemicals are more dangerous than previously thought could dramatically increase the cost of cleanups at sites like military bases and chemical manufacturing plants, and force neighboring communities to pour money into treating their drinking water supplies.”