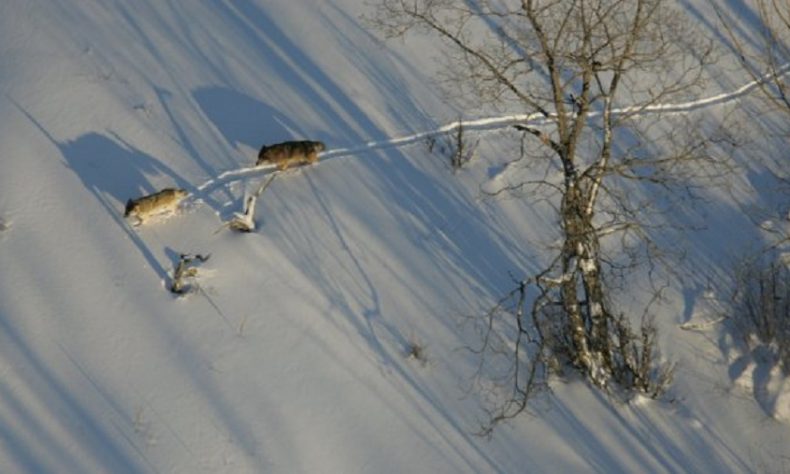 For the third year in a row, the Isle Royale wolf population remains a mere two, while the moose population continues to stay above the historic average. Without the pressure of predation, the expanding moose population will have a greater impact on the island’s forest ecology.

The study co-authors include Research Professor Rolf Peterson, Professor John Vucetich and Assistant Research Professor Sarah Hoy. They say the heart of the study’s success has been the more than 1,000 citizen science volunteers who have bolstered the study’s fieldwork efforts in small teams totaling about 40 people each year for the last 30 years. Together, they helped gather enough skulls to document the shrinking moose of Isle Royale, observe seasonal wolf activity and earned more than their fair share of hiking boot blisters.

The wolves and moose of Isle Royale

In terms of population trends, little changed on the island this past year. As Peterson, Vucetich and Hoy write in the report about the last male-female pair of wolves, “there was no evidence of any change in their status, except they are older by a year.”

The pair are closely related – both as siblings and as father-daughter – and the inbreeding within the island’s isolated wolf population is what contributed to their demise. The wolves’ numbers started plummeting in 2009, declining by 88 percent from 24 to 2 wolves for that period; historical levels of wolves typically varied between 18 and 27. The pair, aged 8 and 10 years old, may have produced a pup several years ago but the female has continued to reject the male as a mate.

One meager hope for new wolves formed briefly in early February. For almost a week, an ice bridge connected the island to the Ontario mainland. However, the ice conditions were rough, the bridge did not last long, and the researchers found no evidence of wolves crossing over. With fewer ice bridges and warmer winters, the chances of wolves recovering naturally is slim.

As the wolf population declined and forage remained abundant, the moose population has been able to expand. Counting conditions for the past two winters have not been ideal, but the team estimates the moose population to be around 1,475 members. The population usually numbers between 700 and 1,200 moose. Hoy, who led the skull size study of the island’s moose that found their size decreased by 16 percent over 40 years, says we are observing a population in transition.

“Although the effects on body size are quite subtle, there was a marked decline in lifespan over the study period,” she said, explaining that wolves are not the only factor affecting moose. The changes in both populations impact the rest of the island, particularly balsam fir, which is a staple winter food for moose. “Maybe the trees can withstand one major source of stress, but with the lack of predation and a changing climate, can it withstand two or more?”

An ecosystem is more than the sum of its species

Peterson, who has been a part of the Isle Royale research for the past 50 years, says the island is a unique place to study moose and wolves. Unlike big, complex spaces like Yellowstone National Park, where the cascading effects of wolf populations are still debated among scientists, Isle Royale is a neatly contained ecosystem that can provide insight into other north woods settings.

“This is the perfect environment to observe predator-prey interactions – but doesn’t make it easy,” he said. “We anticipate big things are about to happen, with wolf predation restored, that will once again change the direction of the island’s ecosystem. It might take a long time to see the full impact of those changes.”

The National Park Service has proposed introducing 20 to 30 wolves to the island over the next three years. The final environmental impact statement was completed and the identified preferred alternative is to restore wolf predation, but the final decision on the plan is pending as of the Winter Study report publication.

An excerpt from the 2018 Winter Study reads: “After 60 years, the Isle Royale wolf-moose project continues. Today, wolves prosper again in several regions of North America. But our relationship with wolves in many parts of the world is still threatened by hatred, and now we face new questions, profound questions about how to live sustainably with nature. The project’s purpose remains the same: to observe and understand the dynamic fluctuations of Isle Royale’s wolves and moose, in the hope that such knowledge will inspire a new, flourishing relationship with nature.”

Many of the project’s discoveries are documented at www.isleroyalewolf.org.