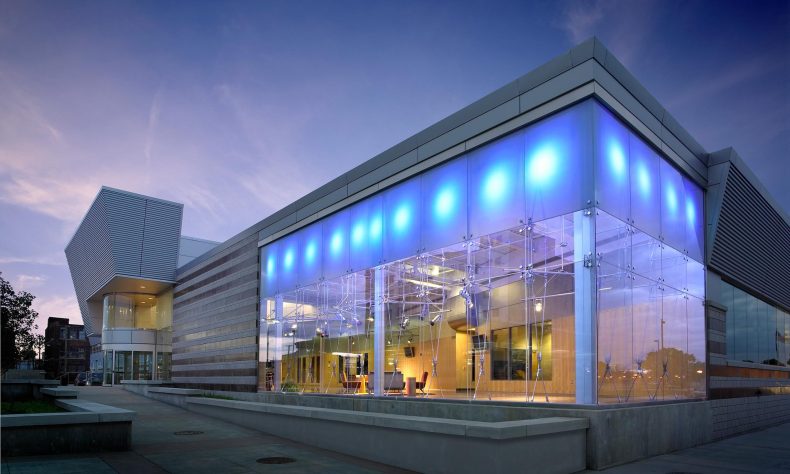 DETROIT — Wayne State University will buy the NextEnergy Center, the state of Michigan’s advanced energy industry accelerator, and transform it into a center for university-industry collaboration and research.

The university announced the move as a $6.6 million investment in Detroit Urban Solutions, a technology innovation consortium. The building will be rechristened as the Wayne State Industry Innovation Center (I2C).

A partnership between Wayne State, TechTown Detroit and NextEnergy, in collaboration with other organizations, DUS will focus on smart cities technologies, including mobility, energy, digital health and civic technologies.

“A focus area in Wayne State’s five-year strategic plan is that the university will become a hub of innovation. This is strong action toward that goal,” said WSU President M. Roy Wilson in a press release. “Building on the momentum generated by Wayne State’s Integrative Biosciences Center and Anderson Engineering Ventures Institute, TechTown, Henry Ford Health System and several others, we’re turning this key part of Midtown into an energized district where cross-sector collaborations will continue to drive our city forward.”

Detroit Urban Solutions is a product of the Detroit Innovation District working group convened in 2014 by Detroit Mayor Mike Duggan. It will include both a physical location as well as a virtual component.

NextEnergy will remain in the TechTown district, leading the mobility and energy initiatives.

“The volume of tech innovation in metro Detroit and on the Wayne State campus, especially around mobility, health tech, cybersecurity and IoT, has been one of our region’s best-kept secrets,” said Ned Staebler, Wayne State’s vice president for economic development and CEO of TechTown. “These efforts will coalesce in Detroit Urban Solutions. I assure you, the next Amazon will take notice.”

As the first major investment in Detroit Urban Solutions, the WSU I2C will use its 45,000 square feet of office, laboratory, and event and demonstration space as a location for university faculty, researchers, and students to co-locate with industry to work on a variety of technology projects. The building offers 18,000 square feet of high-bay, reinforced concrete floor lab spaces. It also includes a micro grid pavilion for vehicle to grid research demonstration, electric vehicle infrastructure, biofuels and hydrogen fuel cell demonstration facilities and an Internet of Things smart house, demonstrating many of the latest IoT technologies.

NextEnergy will continue to use the I2C assets as part of its demonstration and deployment programs, and convening work. Wayne State’s College of Engineering will have a significant presence in the building.