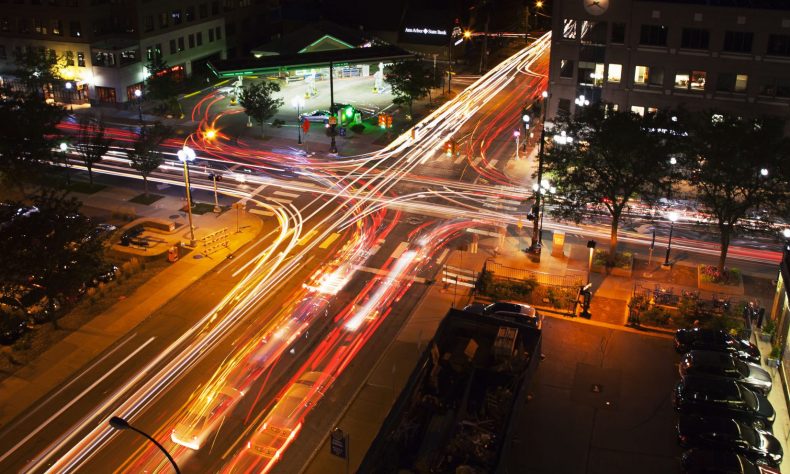 ANN ARBOR — Connected cruise control uses vehicle-to-vehicle communication to let automated vehicles respond to multiple cars at a time in an effort to save energy and improve safety.

University of Michigan researchers have demonstrated its effectiveness on public roads, even when just one automated vehicle is moving among human-driven cars.

Vehicle-to-vehicle communication, or V2V, refers to the ability of cars to wirelessly share data including their speed and position in real time. Connected cruise control can adjust a vehicle’s speed based on information obtained through V2V. It’s different from adaptive cruise control in that it tracks more vehicles than just the car in front of it.

The tests on public roads have shown how connected cruise control and V2V between automated and conventional cars performs in a common traffic scenario — a chain-reaction braking and re-accelerating caused by one car at the head of several others. An automated vehicle utilizing connected cruise control was able to brake with 60 percent less of the G-force required by a car with a human driver.

And that smoother transition from braking to accelerating improved energy efficiency by as much as 19 percent for the automated vehicle equipped with V2V. It also surpassed the performance of other automated vehicles operating without V2V. The results were recently published in the journal Transportation Research.

“Automated cars utilizing V2V data will not only perform better, but they can also foster a friendlier environment where few safety hazards sneak into traffic and higher efficiency is possible for all cars on the road,” said Gabor Orosz, a UM associate professor of mechanical engineering who led the research.

Automated cars are coming, but they will face many challenges when sharing the roads with human-driven vehicles. On-board sensors cannot see around corners or see through buses and trucks. If a car suddenly appears within the sensors’ view, the automated car has little time to respond and may need to brake hard to avoid a potential collision — just like a human driver.

Similarly, if a vehicle a few cars ahead triggers a cascade of braking, on-board sensors only tell the automated car to respond when the car immediately ahead hits the brakes. Not seeing beyond the direct line of sight means lots of surprises to deal with in driving.

While experienced drivers often anticipate potential safety hazards to drive smoothly and stay safe, automated cars still have a long way to go if on-board sensors are their only information source.

“Most of these cars will still be human-driven, but they will broadcast their motion information such as position, speed and acceleration. When an automated car encounters these signals on the road, it can readily pick up such V2V data and see the traffic situation beyond the reach of on-board sensors.”

The research group carried out a series of experiments on public roads in Southeast Michigan where the automated vehicle received motion information from up to six human-driven vehicles ahead.

In the experiments, Orosz’s group recorded scenarios where braking got increasingly more severe while cascading along a chain of human-driven vehicles. When the speed decreased from 55 mph to almost zero and then reached 55 again, some humans decelerated heavily up to 0.8 G, sending anything not buckled down flying towards the windshield. However, the V2V-based automated driving algorithm maintained a steadier speed profile, gliding through the ripples of rapidly changing traffic. The deceleration of the automated vehicle was kept less than 0.3 G, not spilling a drop from a full cup of coffee.

“The V2V data allow the automated car to anticipate how the traffic in front might slow down once someone starts to brake several vehicles ahead,” Orosz said. “The V2V-based connected cruise control then eases off the gas and prepares to brake early on, evening out the brunts when an automated car goes through stop-and-go traffic waves. In contrast, a sensor-based adaptive cruise control would only start to brake after the car immediately in front started to brake, a few seconds after the slowing down is broadcast by V2V. And those few seconds can be crucial when driving in dense traffic.”

Safety and comfort are not the only benefits an automated car can harvest from V2V information from nearby human-driven cars. Orosz’s group also found that the V2V-based automated driving algorithm can save energy in stop-and-go traffic compared to traditional sensor-based algorithms. After all, more steady speed means less energy wasted in braking and higher mileage for a gallon of fuel or a pack of battery. And even human-driven cars following the automated vehicle can save up to 7 percent energy, thanks to the smoother speed profile.

The study is titled, “Experimental validation of connected automated vehicle design among human-driven vehicles.” The research was funded by Mcity, a UM-led public-private partnership working to accelerate advanced mobility vehicles and technologies.