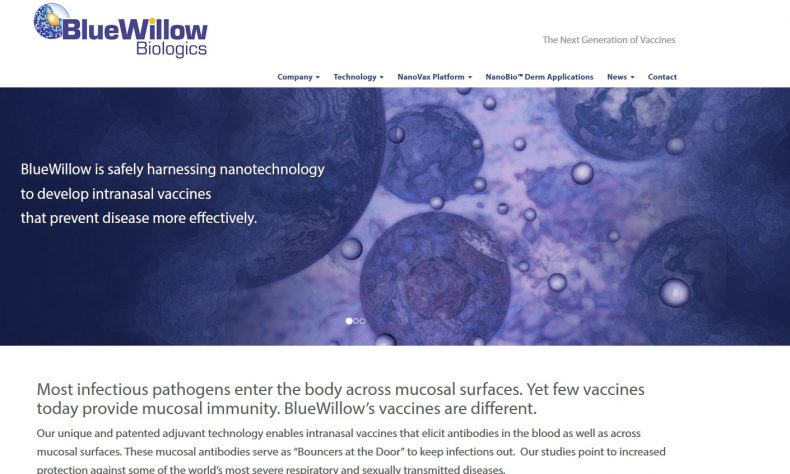 ANN ARBOR — NanoBio Corp., a clinical-stage biopharmaceutical company, announced that it has changed its corporate name to BlueWillow Biologics in conjunction with the closing of a $10 million Series A financing.

The company’s new name reflects its evolution to a vaccines-focused company, and commitment to advancing its novel intranasal technology to develop new vaccines for several respiratory and sexually transmitted diseases.

The Series A financing round was led by Ann Arbor-based North Coast Technology Investors, Atlanta, Ga.-based Line Moon Ventures, and the University of Michigan through its Michigan Invests in New Technology Startups (MINTS) initiative.

The company was originally founded as NanoBio to develop topical nanoscale therapies for various dermatology applications. BlueWillow will continue to develop skin and wound treatments through partnerships and external collaborations under the NanoBio trademark.

BlueWillow’s innovative intranasal vaccine platform is built upon the company’s patented NanoVax technology that employs a unique oil-in-water nanoemulsion adjuvant to elicit both systemic and mucosal immunity. Most infectious pathogens enter the body across mucosal surfaces, yet most vaccines today are injected and fail to elicit mucosal immunity. BlueWillow’s technology has the potential to improve upon many existing vaccines as well as enable the creation of new vaccines for diseases that currently cannot be prevented through vaccination.

“Over the past several years, our research has increasingly demonstrated that our intranasal platform can play a pivotal role in the vaccines of tomorrow,” said Dave Peralta, BlueWillow CEO. “Much of our data points to increased protection against some of the world’s most severe respiratory and sexually transmitted infections. With the commitment of our Series A investors and the tremendous support we continue to receive from the National Institutes of Health, BlueWillow is now rapidly approaching Phase 1 human clinical studies in several programs.”

The name BlueWillow Biologics is a nod to the company’s roots as well as a commitment to the company’s future as a developer of the next generation of vaccines. “Blue” is a subtle reference to the University of Michigan, where the company’s nanotechnology was discovered. While “Willow” refers to willow trees, which are known to have deep, strong roots and large, protective branches.

“The NIH, Bill & Melinda Gates Foundation, State of Michigan, Michigan Nanotechnology Institute for Medicine and Biological Sciences and the University of Michigan Technology Transfer Office have been instrumental in the advancement of BlueWillow’s intranasal vaccine platform,” Peralta said. “We are very grateful to each of these partners, as well as our core investors, for their support, guidance and investment in BlueWillow’s promising future.”