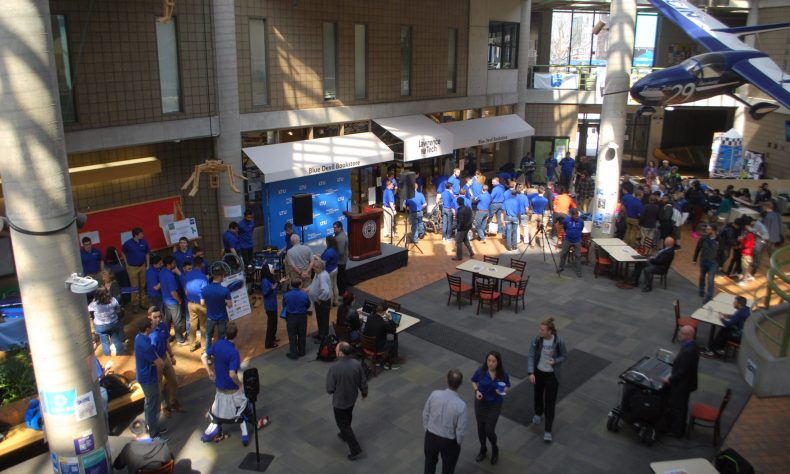 SOUTHFIELD – More than 100 Lawrence Technological University students, along with dozens of faculty members and sponsors, gathered in an LTU rite of spring Tuesday – the Blue Devil Motorsports team unveiling.

The event featured presentations from the leaders of five teams building vehicles for competitions sponsored by SAE International, formerly the Society of Automotive Engineers, as well as a team preparing an autonomous vehicle for the Intelligent Ground Vehicle Competition, to be held in June. LTU is reigning world champion in one of two classes of vehicles in the IGVC.

Included were presentations by:

The Baja SAE vehicle will be competing in Maryland April 19-22. The Formula team will compete in four events over the spring and summer in Michigan, Pennsylvania and Ontario. The Formula Hybrid team will compete in New Hampshire April 30-May 3. The Supermileage competition will be held at the Eaton Corp. test track in Marshall, Mich., in June, with LTU’s goal set at hitting 500 mpg. All teams said they had improved designs from last year.

Team members also thanked sponsors and faculty members. Eaton Corp. and Denso International America Inc. made contributions to all of the teams.